Through The Straits of Messina


The  strait between Sicily and the toe of mainland Italy, the Strait of Messina, is almost certainly the location of ancient Scilla and Charybdis. They have been both factual and legendary nautical hazards of the Mediterranean since Homeric times. The tidal currents generated within the strait have, as late the eighteenth century,  caused capitol ships to lose control and whirl in an occasional  circle. Smaller craft were in deep peril. Apparently in 1783 a mayor earth quake changed the configuration of the seabed in the strait and things just haven't been the same since.

Our passage of the strait in company with Steven and Carol Argosy of "Sea Bird" was without the stuff of legends. The pilot books say that the flow north starts about an hour and forty-five minutes before high water at Gibraltar. It seems odd to use a tidal station hundreds of miles away, but timing it in that manner and at a neap tidal period  all we noticed were some strange ripples and a change, within a few hundred feet, of a negative one knot current to a positive two knots. Very welcome once the swap occurred.
We had motored up from Siracusa to Taormina and spent two nights anchored off Taormina Roads in very settled conditions. The town of Taormina is situated on a cliff above the sea and is a truly spectacular sight. The massive form of Mt. Etna, 10958 feet high, with snow fields and lava flows, smoking away just to Southwest, dominates the landscape.  The views from the town are equally spectacular and the town itself is a baroque beauty. Its also been thoroughly discovered and is filled with low end tourists hoping to see the rich and famous high end tourists. Every expensive European brand you can imagine is represented by its shop on the main drag.

This is the southern end of what might be called a Sicilian Riviera. The coast north towards the strait is lovely but almost completely developed  on both sides. Its just a little too much for our tastes  so we were not tempted to stop and continued on, took a hard left turn clearing the strait and headed another twenty-five miles to Milazzo where we are now comfortably side tied at the Nettuno Marina Milazzo.
We'll spend two mights here and have been laid back relaxing and catching up on boat jobs. I've got an outboard which suddenly doesn't like to run at low rpm,  a fuel hose is cracked. That may get fixed this afternoon. The weather has finally become much like a real summer. We've been socializing with Sea Bird, very nice to have nice company. 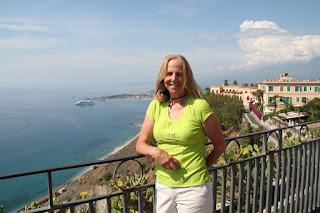 The plan is to depart tomorrow for the Aeolian Islands just twenty-five miles to the north and spend a few days, then back down to the north coast of Sicily and work our way westwards until the weather cooperates and our desires cause us to push on to Sardinia. Life here is good if not terribly exciting, and excitement can be greatly overrated, so were having a good time.

PS: Replacing the outboard's carburetor fuel supply hose worked. Yippee! That's excitement we like.
Posted by Bill and Janet Wickman at 8:20 AM

Dear Bill, the last two pictures with the beach one with Jannet and the next with you are one of the best that you have sent us!! Have calm seas and enjoy your trip.

Dear Bill, we met at Jim and Susan's house in Mill Valley for dinner a few months ago, where we shared our trip plans: your independent sailing and our very dependent cruise. Joan and I just got back from our cruise where we also visited Taormina last Monday and sailed through the Messina channel to visit Amalfi and Positano last Tuesday. We certainly agree with your opinion of Taormina: lots of high end shops and lots of tourists, but we really enjoyed it.

Bill & Janet - The scenery you two keep seeing is just spectacular ! ! We all enjoy reading your commentaries as well. Enjoy. Charlie & Sue. P.S. We did get in 5 days of San Juan Island cruising & kayaking - even showed my oldest daughter & her Ecuadorean husband these beautiful islands.