We're in Cagliari, Sardinia at Marina Portus Karalis, very much the urban Italian marina scene and very nice indeed. How we got here over the past week is becoming a blur already.

We departed Milazzo after a couple pleasant nights and took a twenty-five mile detour  North to the Aeolian islands and spent a night anchored at Porto de Ponente off Isola Vulcano,  aptly named for the active volcano that forms the island. The island is pretty enough but the anchorage was crowded and the atmosphere ashore rather tacky and after a nice swim and a decent night at anchor we continued westwards along the north coast of Sicily to Cefalu.
The marina docks at Cefalu will be memorable in that they were the rolliest, least secure we may have ever encountered anywhere. The marina is very exposed the a NE wind and if it had been much worse it would have been untenable.

But the old town was truly lovely, evoking memories of its medieval past at every turn. The "duomo",  an eleventh century Norman church,  manages to somehow combine Norman stonework, an almost Gothic nave and an Orthodox mosaic ceiling above the alter and make it all work. Its a beautiful church inside and out. 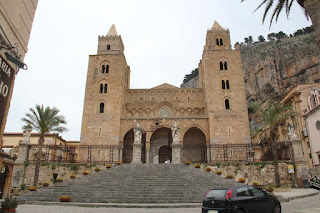 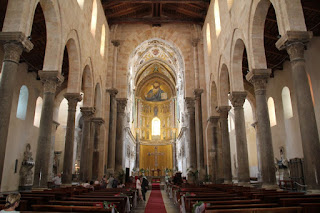 We have been traveling with Steven and Carol Argosy of MV Seabird pretty much the entire time since leaving Siracusa and had been watching the weather and plotting with them a good time to begin  the two hundred and forty mile trip up to Sardinia. Since they're a sixty-two foot power boat and we are us we have slightly different ideas about the perfect outlook.

They left about twelve hours ahead of us. We both got it a little wrong and the passage was broken up by some of the weirdest and most confused seas I've seen anywhere. Nothing dangerous, just uncomfortable and frustrating for about twelve hours of the thirty-six hour passage. Its hard to get it exactly right in the Med.
We made landfall at Villisimius, Sardinia, the extreme SE corner of the island,  where there is a very quiet and secure marina. Its a few miles to the nearest village but a popular tourist destination for the Sards and it does have the nicest beaches we've seen in the Med. It also has a salt water lagoon with resident Pink Flamingos which we haven't seen since Walvis Bay in Namibia. Something is very cool about having a flock of Flamingos flying over the boat every morning. We took some nice walks and enjoyed the very excellent restaurant at the marina.

Its only about twenty miles from Villisimius west over to Cagliari, the biggest city and the capitol of Sardinia. We had planned on using a certain marina but a nice Austrian guy with a big power yacht who bases the boat in Cagliari gave us a heads up about this place being much cleaner and more convenient to the interesting part of the city so we took his advice and here we are, quite happy.

We arrived about 1030 this morning and took a nice walk, a long climb really, into the old walled part of the city. Lovely architecture, nice atmosphere and the usual big Baroque church, Santa Maria, this one being just a little too Baroque for my taste.
Seabird arrived an hour or so after us and we will get together tonight for an "Asian fusion" dinner. That will be quite a break from the recent fare. Cagliari seems, old and new, to be a very attractive city. We've got a car reserved for a couple days starting tomorrow and will explore some of the Sardinian interior. Supposed to be very rugged and beautiful. In 1981 I did some flying over this island and have always remembered how unspoiled the countryside and villages looked from the air, I've been wanting to do this little exploration ever since.

Love to all,
Bill & Janet
SV Airstream
Posted by Bill and Janet Wickman at 7:52 AM

Bill & Janet - It sounds awesome in Italy- benvenutti ! Keep enjoying your explorations. I'm off to NRt,PVG,and HNL today on a 7 day, I have not been to NRT in quite awhile. Arriverdercci !!!! charlie

Today I found time to the very nice pictures and the perfect comments that you have. Everybody who looks and reads what you sent us wants to be with you!! Enjoy your beautiful trip!!

Hi should you round Sardinia passing east (Thyrrenian sea) before arriving in the "Costa Smeralda" I recommend you to pass a night at anchor offorads Tavolara island, it's just south of Olbia. Good sheltered anchorage with white sand in abt 10 m depht.

Beautiful Pics....makes me want to go on vacation too!!! --- maybe we can meet up somewhere in the area next year or so! Thanks so much for sharing!