The Gulf of Argos, or more properly, the "Gulf of the Argolid". The Argolid, legendary home of Jason and the Argonauts. Occupied since neolithic times, since at least 28000 BC. Evidence of early  Minoan type civilization exists back to around 3000 BC. The Mycenaean civilization centered at Mycenae dates to around 1600 BC and from that era till about 1200 BC the Homeric epics date.

The themes from The Iliad and The Odyssey may have been first "composed" by Homer in the seven century BC but the history they were based on probably was several hundred years old by that time. Argos was the city-state  rival of Sparta for dominance in the Peloponnesos for almost a thousand years. Sparta, neighbor to the southwest,  ruled Laconia with an iron age fist.  Laconic?Enough? We're on hallowed ground for a history buff. Every square meter of this land has been loved, contested and fought over since western recorded civilization began.

And we're in a very, very nice spot. This is Zogeria, a mile wide bay on the northwest tip of the island Spetsai,  just at the entrance from the north  of the Gulf of the Argolid. We came in yesterday from Naphlion intending to spend an evening and decided to make it a couple days. The bay is surrounded by pine covered hills with cicadas buzzing away in the warm breeze. There are a couple white washed chapels on shore, a small unoccupied home in the trees and Peacocks running wild.  There are two other boats anchored out, well off, and the water is absolutely crystal clear. Ashore there are a few souls who have arrived via motor bike to enjoy their Sunday afternoon but its very quiet and very, very relaxing.
Last night was a little different scene. In the cove just to our west two mega yachts (we're talking 200' power boats)  are stern tied to shore below an elaborate villa in the trees. The tiny chapel  off our bow was the site of a wedding with, we were told, two hundred and fifty guests from the mainland, all ferried over by water taxi, and beyond that below the villa with the yachts was a major set up for dinner, drinks and entertainment for the wedding party. Word of mouth had it we were all invited to observe the wedding and join the party but we didn't really feel comfortable so we sat and watched the fun through binoculars and listened to the band until four in the morning when the fleet of water taxis blasted off back to the mainland.

The plan is to head for Poros next, spend a day there, and then onwards to Zea Marina in Piraeus, the port city for Athens. Since both of us have had enough experience with Athens we'll only be there a day or two. I want to see the new National Archeological Museum which has been completely rebuilt since we last visited more than twenty years ago. Then it will be through the Corinth Canal to the Gulf of Corinth and westwards into the Ionian Sea.

From Tinos, where we last updated the blog, we had a short trip over to the Finikas anchorage on the west side of Siros. We had a good spot inside the small harbor and Nikos, the harbormaster, was the very best with everyone.
We stayed a couple days and took the bus over to Eurmoupolis, the "capital" of the Cyclades. We found a busy bustling industrial town, a major ship yard with big dry docks and not a place we'd want to put the boat. We did hike up to the nice 19th century cathedral and enjoyed some nice urban architecture but on the whole weren't that in love with Eurmouplois or Tinos so we pushed off for Kythnos, the next island west, without regret.

And Kythnos was quite lovely. We had a nice sail over from Tinos. We had a good mooring inside the quay in the tiny port of Loutra with nice neighbors from the US and the UK who had cruised together for years in their Halberg Rasseys.
The port was nice but the chora, the main village, up the hill was especially lovely and unspoiled. We'd take the bus up the hill to the chora, explore around, have lunch and then walk the five K back down to the anchorage. It was our last island in the Cyclades and it was a good farewell. Kythnos is very sweet. 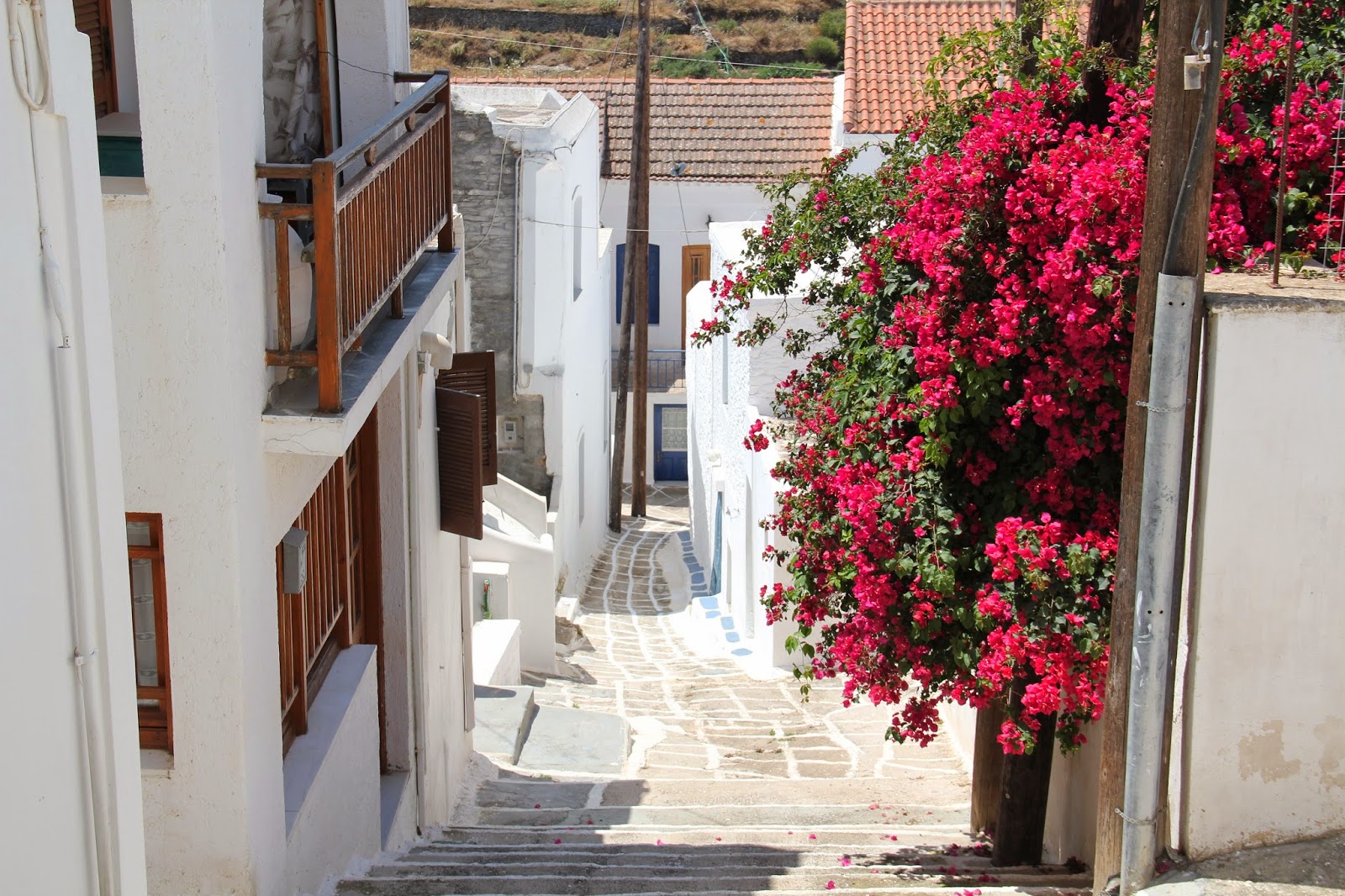 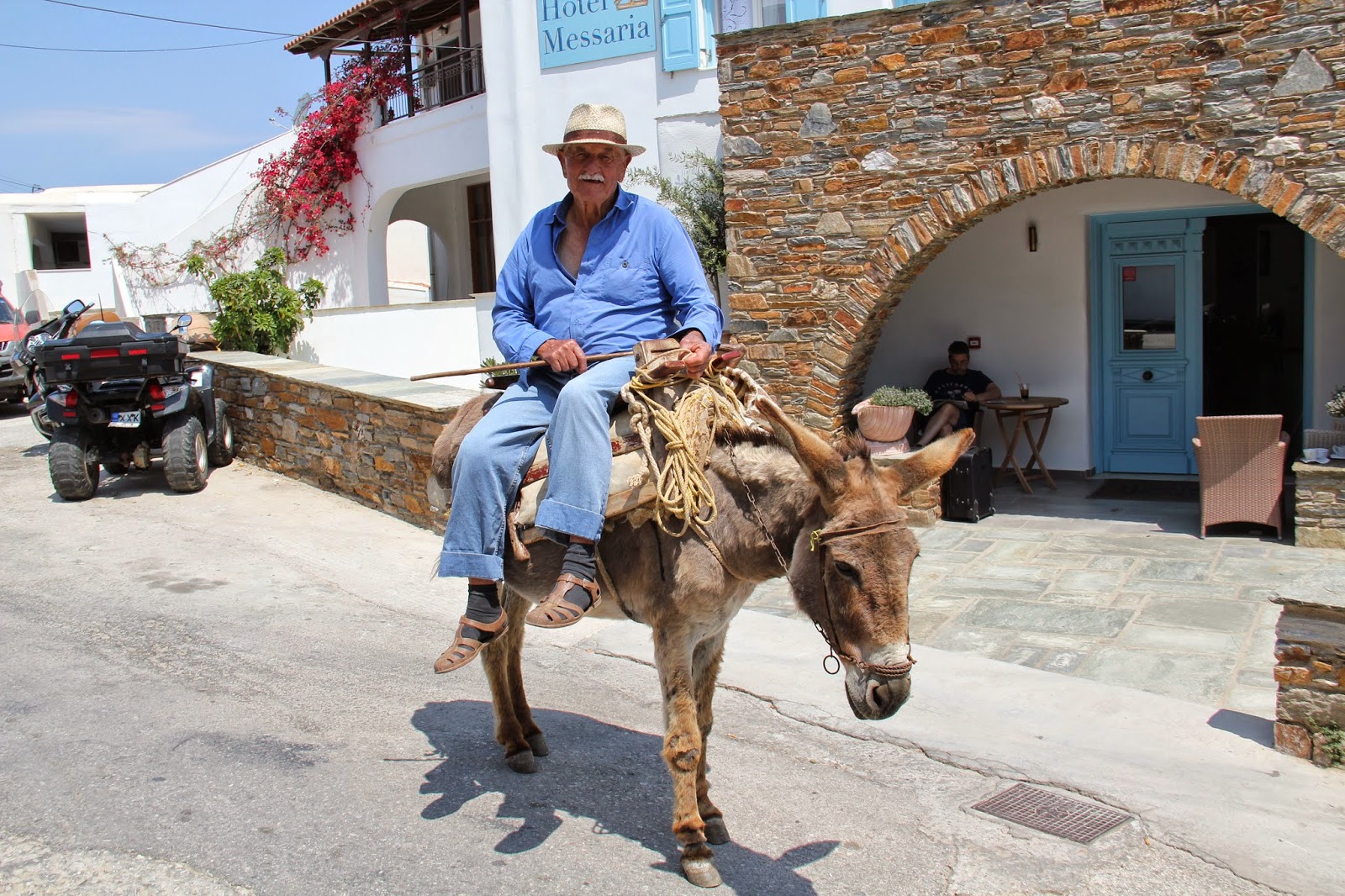 We had a great sail from Kythnos to Hydra, a 50 mile beam reach fully powered up under main and 150% genoa doing 7-9 knots almost all the way to the island. We looked into the tiny port of Hydra town and it was totally full and soon to be fuller with rafting up flotilla boats so we went into the anchorage of Mandraki and anchored out.

Nice spot and just a few K to walk into town. Hydra town is a classic and even with all the tourism from Athens its still nice. One thing they've done is prohibit any wheeled transport, not even bicycles are allowed. You want a ride, you rent a donkey or a horse. Once you get into the back streets away from the harbor area its very sweet.
The main goal of this trip up the gulf was Naphlion and the Argolid. After a night at Mandraki it was a motor job up the gulf to Naphlion but scenic enough to be enjoyable. Naphlion was for a short time the capitol of modern Greece and has always been, under one name or another, the major port of the Argolid. It has been discovered by modern tourism but its still a nice city and an easy uncrowded place for a yacht to moor. We side tied to the quay and had everything we wanted within a short walk. The main attraction at the town itself is the fortress of Palamidi above. 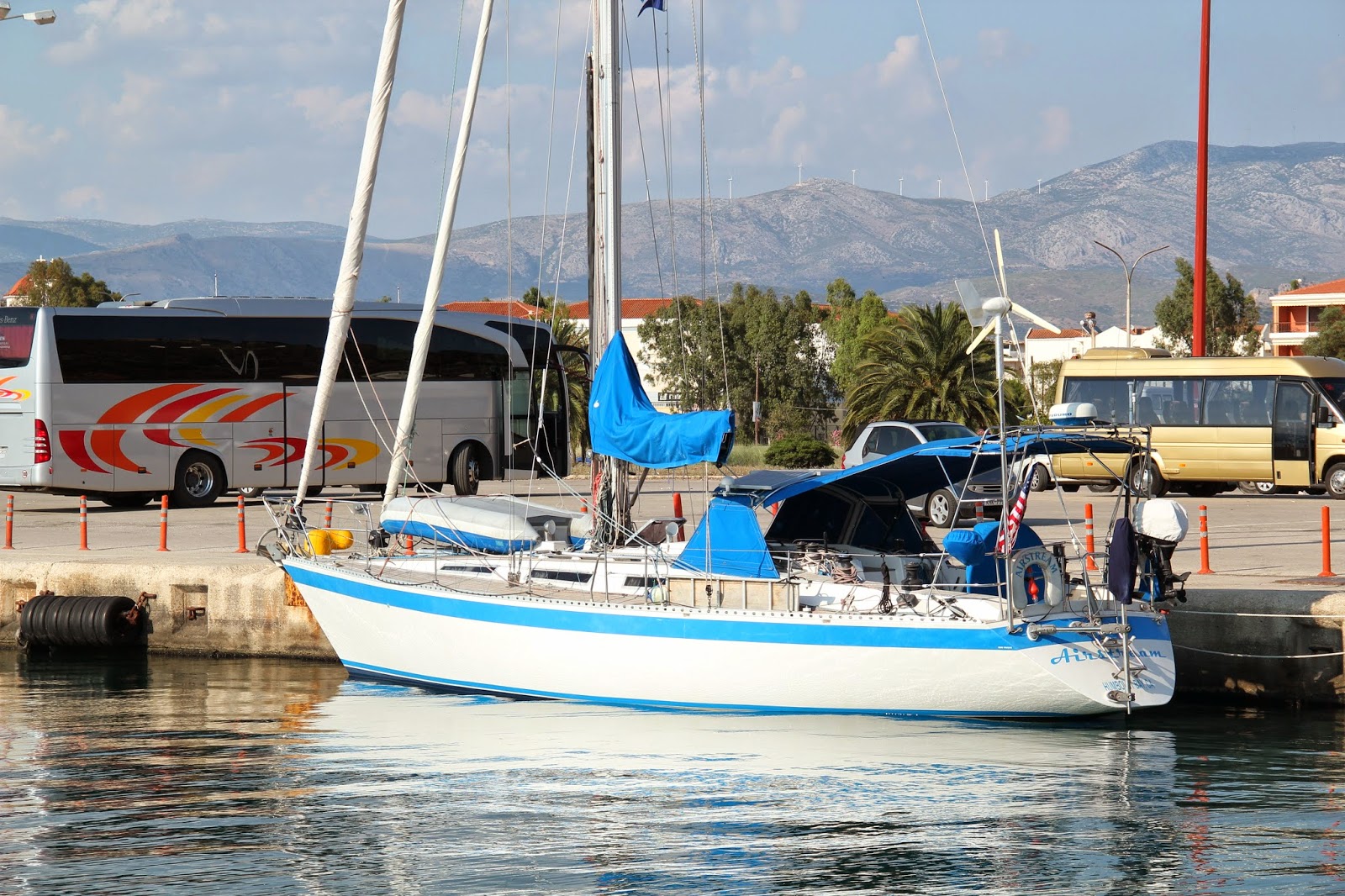 This is relatively new (1711-1714 construction) Venetian and is considered the finest Venetian military architecture in existence. It certainly is impressive and the 999 steps up from the city below   (they claim, we didn't count) provide a way to get your heart started for the morning. The view is spectacular and well worth the climb. I don't even like to think about the effort that went into building the place in a day before mechanization.
We rented a car and drove up to Mycenae. More fortress of course, this one to 1600 BC, huge 'beehive' tombs and one of my favorite ancient sites anywhere. We drove up to the Corinth Canal. We drove around the Argolid to the site of ancient Epidavros and the excellent Hellenic amphitheater and got a nice feel for the countryside. There are reasons why European civilization flourished so early here. Mainly its such an appealing and human place to exist. The weather is not harsh but not enervating. The terrain is challenging but not impossible and there is always the sea for transport. The land is fertile and was once more so. There is, or was,  abundant timber. Its well watered. Every hilltop is a defensible position.

Humans could exist here and hunt and fish and engage in agriculture and begin to trade their excesses with others. Eventually they had time for a few luxuries,  to engage in a little art and develop some written language. The rest is history.

Posted by Bill and Janet Wickman at 10:03 AM