Food poisoning! Yetch! We're on the quay in the village of Pythagorion, the island of Samos, Greece. Lovely place. Two nights ago we ate at a  recommended restaurant and had a lovely meal, well served, with friendly cats begging under the table. I had Kokinnsto, which is a rich beef stew in a red wine sauce. Absolutely delicious, memorable. Shortly thereafter I was praying to the porcelain goddess with all the other symptoms as well. It took another twenty four hours to feel human.  Janet was fine, her Moussaka was harmless. I'll never be able to order Kokinnsto again.
Pythagorion, named after Pythagoras who was born on Samos, is the main yachtie hangout on the island. Of course there are a number of nice anchorages and we spent three nights anchored out at Posidonion, which is a classic Aegean spot. Vathi is the main town on the island but the bay there isn't well protected from the the Meltimi (the prevailing north wind this time of the year) and few boats want to get beat up in Vathi. Here there are about twenty five boats on the quay and another dozen anchored out. Its costing us six Euros a night and so far no one has said anything about charging us for shore power or water. What luxuries. We have nice neighbors, a Brazilian couple to starboard and Canadians from Montreal to port. Pythagorion itself is a touristy place but its nicely done and pleasant enough.
Once off the main drag the town has character and the usual recorded history going back at least three thousand years. The island of Samos has always been a rich and influential place in the eastern Aegean. Polykrates brought the place to prominence in the 5th century BC until the Persians invited him over to a little diplomatic meeting where they crucified him. The rest of the history is similar. Samos played a major part in the Peloponnesian War and  throughout the centuries, including the Greek War for Independence, has always been a very involved place. Physically its a big mountainous island with some agriculture inland, some very good white wines and great rugged beauty.
The last blog post was from Psara. From Psara we did a short passage twenty miles east to the island  of Oinousses just east of the northernmost point of Chios. The town there is Mandraki. What can I say? Another beautiful quiet mountain side village? Yes, but this one is a little different in that  a few of the wealthiest ship owning families in the world call it home. There are some truly regal mansions on that mountainside. There's also one of the nicest maritime museums we've seen with one of the best collections of ship models anywhere outside the Smithsonian. The town is very quiet and I don't think we ever saw more than twenty people during a day.
However, there is a rather nice yacht club near the quay, open to the public. By about midnight the place is blasting away with Greek boom boom music and it doesn't stop until six in the AM. Incredible! One night I went up just to see what was going on and the place had 100-200 Greeks between the ages of 25 and 45 having a very good and very loud evening out. There are only about 450 people on the island, supposedly, and no nightly ferry service. Where these folks come from and where they hang out during the day is still a mystery.
From Mandraki it was ten miles down to the 'marina' on the island of Chios. I say 'marina' because although it is a well constructed and secure facility it was never completed and sits untended and completely empty except for the concrete quays. No one watches over the place and there's no charge for being there so naturally cruising yachts come in and tie up for a secure, and free, berth. Its only about a click into the the main town of Chios where there's another poorly protected harbor so the 'marina' is the place to be. We rented a car for a couple days of driving around Chios where there are some of the most interesting medieval fortified villages we've ever seen. 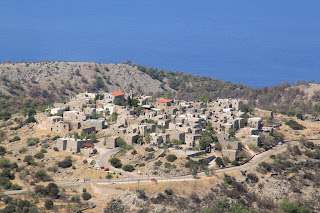 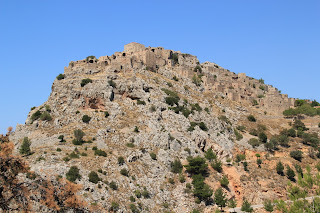 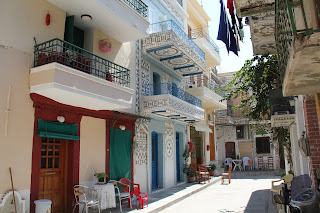 Much of the island is stark and barren mountain after mountain with tiny villages set back from the sea. The town of Chios was leveled during a huge earthquake in 1855 so its relatively modern in appearance and not so charming but with a population of thirty thousand it had some amenities we hadn't seen for some time including English language newspapers available for purchase.
It was pretty bleak and barren at the marina so we moved a few miles to the Emborios anchorage at the very SE tip of the island. Emborios is very nice and as sweet as the 'marina' was bleak and barren. A couple nights there and we were ready for the major passage to Samos.
This is sixty five miles from Emborios to Posidonion and by Aegean standards a major event. The forecast was  for a nice breeze on the beam building through the day. It worked out to more wind than that, 25-30 knots backing around to almost astern so it made for a fast and boisterous sail around to the east end of Samos where we dropped sail and motored into Posidonion.
So we completed one permutation of a circumnavigation of the northern Aegean. We last were in Posidonion the 4th of June when we were headed north along the Turkish coast and decided to make a little 'undocumented' visit into Greece. This time we were legal and stayed three nights before moving here to Pythagorion.
The end of the season is in sight. We have family arriving in a couple days. Jim and Susan Tighe, Janet's sister and her husband, will join us for a few days and we're looking forward very much to the visit. We'll move into the Dodecanese with them and visit Patmos with out much of a set itinerary.  Our Greek visas are good until the 22nd of September so then we've got to go back into Turkey. We'll get back to Marmaris, put the boat on the hard and be home by the 15th of October. That's the plan!
Love to all,
Bill & Janet
SV Airstream

Posted by Bill and Janet Wickman at 1:00 AM