Back on the island of Symi to be more precise. And Symi is my very favorite Greek island. One of our favorite places anywhere as a matter of fact. But why, you say? Ahh grasshopper, many reasons! As a man I am accused of being visually oriented. I like stuff that looks good. Few places are prettier than Symi. The island has the usual craggy and sparsely vegetated Aegean aspect surrounded by the clearest and bluest of seas. Its thinly populated with most of the inhabitants clustered in Symi town itself. There are a few lovely isolated anchorages but what really makes Symi special is the town itself. Its terraced up the sides of the mountainous little bay which forms its harbor. 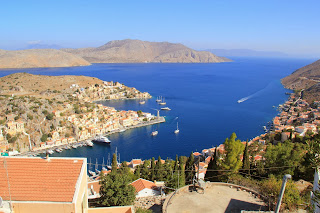 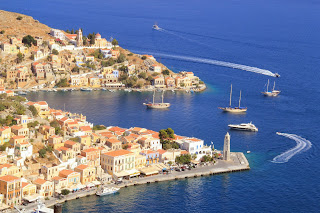 Masonry homes with red tile roofs painted in light shades of yellow, blue and brown amongst the bare stone. Narrow nearly vertical passage ways between the homes. Bougainvillea, olives and figs growing alongside and overhead as arbors. From the ultimate heights above town the view is simply magnificent. And the town remains unspoiled despite an active tourist trade. It retains its "flavor" and, compared to some island towns which now could be anywhere after  thirty years of mass tourism,  its a haven. 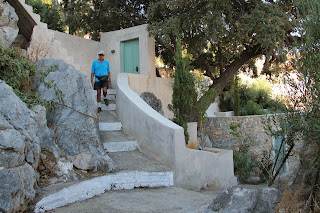 There's no airport on the island and its unlikely, given the terrain, to ever have one.  We stopped here on the way north last spring, anchored in Pethi, and took the bus to town. This time we're fully 'documented' and on the quay in town itself. This evening we'll check out of Greece, our ninety day visas are up, and head back into Turkey. With maybe a stop or two on the way.
Our last update was from Samos at Pythagorion. We stayed there ten days exploring around and killing a little time until Janet's sister Susan and her husband Jim could come over from touring around Turkey a little and meet us. Of course the day they were to catch the ferry from Kusadasi to Samos was the day the Greek government and the Turkish ferry company decided to escalate an old pissing match over new taxes and the Turks cancelled the ferry indefinitely. Perfect timing! There  were enough permutations of this silliness that I won't go into it all but they did arrive after only a thirty six hour delay and we were happy to have them aboard at last.
We rented a car and drove around Samos for a couple days prior to their arrival and with them. Samos is a beautiful island. It's like most Aegean islands but written large with higher mountains and more vegetation and lots of vineyards inland. There are truly beautiful mountain villages.
From Samos we had a smooth trip over to Patmos which had been a major goal for their visit. Patmos is another airport less island. The port of Skala is nice enough and the island is barren/beautiful but the real reasons for visiting Patmos are the Chora (village) and the Monastery of St. John above the port and the cave of the apocalypse where St. John wrote the Book of Revelation while being banished there in 95AD.
Patmos is almost a Cycladic town in  the cubist white washed homes with blue trim. In the chora itself there's little evidence of foreign influence and its a quiet and beautiful place with lovely views. The monastery is a massive fortress built in the 11th century which still has an active population of about a dozen monks and much of it is closed to the public. Of course the chora was built around the fortress/monastery as protection against pirates.
We anchored out the second night in Patmos at a nice spot and had that most rare of Aegean experiences, a nice anchorage and we were the only boat there all night, amazing!
From Patmos we had a nice thirty mile broad reach down to Kalymnos and the anchorage at Emborios. Kalymnos a very rugged and precipitous island with little vegetation anywhere, starkly beautiful. We had a mooring for once. As a matter of policy I don't trust moorings so I did a quick little snorkel to check this one out before we spent the night. Turned out there was a massive new chain from the surface buoy down to a concrete block that weighed at least ten tons. Very nice indeed.
Jim and Susan had to catch a flight out of Kos the next afternoon so we departed early and motored in calm conditions to the marina at Kos. We had time for nice lunch at the marina and they were off to the airport and a flight to Athens and then home. It was very nice to have them aboard but the time was too short.
For those of you contemplating a little time in the Dodecanese I will say the marina at Kos is the best we've encountered all year and the prices are very reasonable, especially when compared with what the Turks charge just across the straits at Bodrum or Turgetreis. The marina has all the amenities and is well run and a very nice place to spend a little easy living time.
Unfortunately Kos is that other side of Greek island tourism in that it's almost totally lost its identity. It's completely flavorless, as a friend said, it's been neutered entirely. You can walk the streets of Kos and have to look twice to know you're not in Puerto Vallarta in the winter or Skagway in the summer. Once tourism reaches a certain level it seems to devour identity and masses of 'all-inclusive' weekend travelers wonder the streets looking at each other shopping the same shops they would anywhere else in the world.  The last day we were in Kos there were sixty four flights in from northern European destinations. There are things around Kos worth seeing, the castle is excellent and the Asklepion of Hippocrates is lovely and serene, but Kos town is an example of what not to let happen to your beautiful city.
We had another motor in nearly calm conditions to the island of Nisiros where there is a very nice small anchorage. Its a sweet and unspoiled island. We had the best swimming to the trip on the other side of the breakwater from the quay. The visibility was more than 100 feet and there is a nice drop off into deep water and the best fish population we've seen this year. Unfortunately our visas are running out and its time to get to Symi where we can take care of the formalities. We'll see Nisiros again next year.
So we're happy to be back in Symi. It's Saturday and the ferries  dropped off about two thousand people a couple hours ago. I'm sitting in the cockpit of our boat watching them stroll back towards their drop off point. Another couple hours and they'll be gone somewhere. Symi has managed to enrichin itself a little  yet retain its soul. Good for Symi, I wish them and all the Greeks, who are amongst my favorite people,  the very best.

PS: Any of these images can be viewed full size by double clicking on the photo.

Posted by Bill and Janet Wickman at 5:52 AM