We arrived in Skyros with a bang. Or maybe it was a "crunch". Whatever descriptive term used it was loud, sounded horrible, and was the first damage we've suffered at a result of the "Med tie" method of docking used commonly in the Mediterranean, and thankfully, nowhere else. Dropping anchor and backing in to stern tie to a concrete quay is the most common permutation. That was the case in Linaria, the port town on the island of Skyros, the largest and most southeastern of the Northern Sporades group.
Of course the wind was blowing strong on the starboard bow as we backed in and although they have laid mooring lines (rather than anchoring) there was no one to help carry the line forward. I was standing off a few feet from the quay trying to keep from getting blown sideways into the concrete, reversing back and forth, when I got too much power in going back, the ZF transmission won't shift unless its at idle RPM , and by the time the shift occurred the Hydrovane mount made firm, very firm, contact with the quay. Expletives deleted. Anyway there was no hull damage but the very strong Hydrovane  mount was bent and a large stainless bolt broken and the Hydrovane shaft bent. All this can be fixed and luckily we're not using the Hydrovane on these short Med passages. As is sometimes said in aviation, the only really serious damage was to the ego. My personal status as a Med tie guy has slipped considerably just when I thought I had it pretty well down.
The abrupt arrival in Skyros came after a nice sail down from the island of Kira Panayia where we spent a very nice night anchored in the southern bay. This was   the only place we've seen in the Aegean with no sign of human habituation, other than boats, and it was lovely. Prior to that we'd spent a few days in Patitiri, the port of the island of Alonnisos. We were a little disappointed with Patitiri, it seemed a rather soulless place to process tourism. Even the magnificent site of the village above the port seemed somehow less than satisfying and after a couple days we left the island.
So after Alonnisos and Kira Panayia we "arrived" at Linaria in Skyros. And Linaria was quite nice. There's really not much of a village there, just a few tavernas, shops and a couple markets but the atmosphere is friendly and welcoming. The actual town of Skyros is on the other side of the island on a mountainside above the sea and is spectacularly beautiful.
We rented a moped and did the island tour. We walked the steep pathways of the town and in general enjoyed the atmosphere of the place. In Linaria on a cliff above the anchorage is our  favorite bar in the Aegean. This is "Kavos" and  is a series of platforms on a rocky cliff leading down to the water. The drinks are good, including the first and only decent chocolate milk shake I've found in the Med. The music is nice, varying between the Grateful Dead and  Strauss, and it is a great place for a swim off the lowest platform, a warm shower on the rocks above and an icy Ouzo to watch a great sunset over the Med.
Most evenings a ferry arrives and whenever a ferry arrives Kavos cranks up the music to about 150db and plays the first movement from Strauss's "Thus Spoke Tharastrula" better known as the theme from "2001: A Space Odyssey". Given the circumstances this is very cool and a great piece of music while the ferry maneuvers for landing is enjoyed by everyone. The other nice thing about Kavos, they turn the volume down at night so you don't listen to boom, boom till the wee hours. 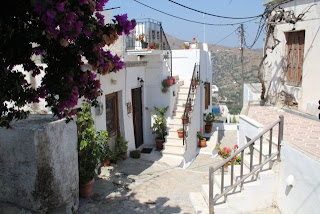 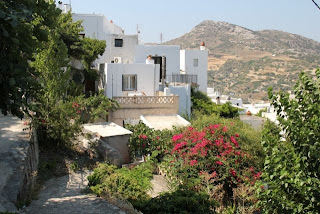 We stayed in Linaria a week enjoying the island and then waiting for the Meltimi to calm down a little before doing the "passage" over to Psara. This Meltimi has been blowing for weeks and shows no sign of quitting until September so we waited until yesterday, the 20th, when it seemed there might be a little less wind, and headed over on the fifty-five mile sail. All in all it was fine. We had twenty to twenty five knots a little ahead of the beam and four to six foot seas, closely spaced,  on the beam or a little ahead. We put two reefs in the main, set the stay'sl and a little genoa and did about seven knots all the way. We could have gone faster but this was a comfort compromise and it was fast enough. It was  rolly and wet but we're getting pretty soft after all this Aegean sailing. Going hard to weather would have been much tougher.
So now we're in Psara, a small island about ten miles west of Chios (or Khios) and  this is technically the "Eastern Sporades". Psara is mountainous, barren, bleak and beautiful. There is one village and about four hundred and fifty people on the whole island. The only foreigners other than ourselves we've seen are a very nice Italian couple on another cruising boat. There are a few tavernas, a very small market and a couple very interesting looking churches, neither of which has been open yet while we were around.
Psara has a typical Aegean history. Occupied since Mycenaean times its been the scene of periodic slaughter, massacre, annihilation, etc, etc. The last big one was fairly recent. Psara has always been a center for sea faring (sometimes considered piracy) and was one of the first islands to revolt during the Greek War of Independence around 1821. They gave the Turks (the Ottoman empire) a bad time until finally the Turks managed to land and kill every man, woman and child they could find. A very few survivors made it back to mainland Greece. As a follow up Constantine Kanaris, a young Greek naval officer from Psara, took a fireship along side the Turkish flagship as they were celebrating this victory and a much larger slaughter on Chios. Kanaris managed to blow up the Turkish powder magazine and kill the Turkish admiral responsible for the killings and two thousand other sailors. Kanaris and his crew escaped to survive the war and Kanaris was eventually elected Greek Prime Minister six times.

Tomorrow morning early we plan on heading over to the northeast of Chios to an island called Nisos Oinoussa. We'll get the early start to cross the ten miles over to the Chios channel before the Meltimi has a chance to fill in. We plan to anchor at the small town of Mandraki,  which all say is quite lovely,  and spend a few days before heading down further onto Chios itself.
So  we will have completed a loop around the northern Aegean. It almost feels like going home to be back in the Eastern Sporades and the Dodecanese. We're looking forward to being out of the Meltimi, this wind gets very old, and to seeing some very nice places on the way south.
Love to all,
Bill & Janet
SV Airstream

Posted by Bill and Janet Wickman at 5:05 AM