The Ionian Coast, And A little Dodecanese

We're in Kusadasi, Turkey where the main attraction is close access to the ruins of ancient Ephesus. We have a day long Ephesus tour arranged for tomorrow and everybody says its spectacular. Actually Kusadasi itself seems a nice enough town. Its a major cruise ship and tourist destination but, at least this time of the year, it isn't a total zoo.
The marina is very nice and much less expensive than Bodrum. All amenities are available and there are the usual (in Turkey) very sleek and friendly marina cats so Janet can get her cat fix daily. Life back in a marina is pretty good after a couple weeks in the 'bush'. We'll be here four days and then its off to the north once again.
And it has been an exciting trip up the Ionian coast which, if possible, is even more historically interesting than the Carian. From Gumusluk we edged around to the north of the Bodrum peninsula to seek shelter from a southerly wind forecast to 50 knots. In a little bay called Ilica Buku we anchored out with Mark and Laura on their boat "Sabbatical 3". There were gusts all day to over 30 knots in this protected area and the holding was not good. We dragged several times but there was plenty of room. The main problem was that there used to be fish farms in the bay and the bottom is full of old net and other crap that gets caught up in your anchor. I went over in the dink and helped a big Dutch boat cut off about a ton of net and trash that he brought up. We finally found a nice spot where there was shelter, decent holding and no stuff on the bottom and sat out a decent night.
Agathonisi is a small Greek island south of Samos and about 28 miles north of Ilica Buku. Its considered part of the Dodecanese group and seemed like a nice next destination with a couple good anchorages. It proved to be very lovely, quiet and unspoiled. There are only about 150 people on the island, a couple small markets, two tavernas and a creperie, of all things, to go along with the required bakery and ouzaria.  The tavernas were very good and Janet has discovered a taste for ouzo… could be interesting. We had another southerly blow through and the anchorages in Agathonisi are pretty exposed to the south.
We rode it out in a cove with some shelter and watched a couple charter boats get  pretty badly pounded on the quay before they moved off. All the Greeks and Turks we talk with say this is a very unusual year with all these southerly winds. It is nice not to be bucking the usual northerly stuff heading north but the nicest anchorages are often exposed to the south.
After four days in Agathonisi we went north to Samos and the Posidonion anchorage on the very southeast tip of the island in the Samos Strait between Greek Samos and the Turkish mainland. Samos is a lovely, rugged and mountainous island. The Posidonion anchorage is almost undeveloped with just one nice taverna on the beach and a jewel of an Orthodox chapel above the bay. 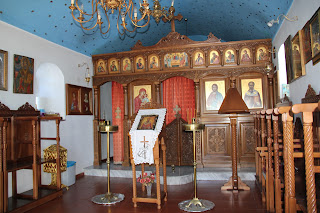 The water is absolutely clear and the holding excellent over nice sand. Again it is exposed to the south but conditions were calm and it was a great anchorage. Mark and Laura stayed another day in Agathonisi but we ran into our friends Walter and Sandra aboard their boat "Sepia" and enjoyed a nice evening with them.
So now we're enjoying beautiful days in Kusadasi. We have Mark and Laura from Sabbatical 3 and Walter and Sandra from Sepia to socialize with and a friendly cat who comes aboard as she wishes and behaves properly. Life is good! 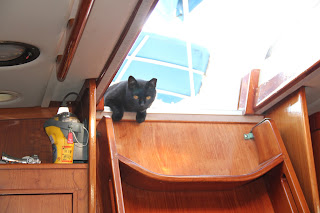 Posted by Bill and Janet Wickman at 1:29 AM