So I thought I called room service the evening after arrival and ordered the "wood fired New York pizza". It never came. Next morning I went to the boat and found these guys hammering the wood decks off my boat! Ouch! The language barrier can be a problem. 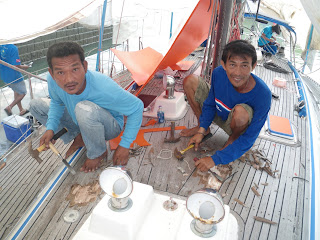 Just kidding of course.  I can tell you that when I saw them take those first chunks out of the deck with a razor sharp wood chisel and a hammer I got a very funny sensation. It felt kinda personal. The guy on the right in the photo above is Phon of Phon Carpentering, the contractor I chose to do the deck removal and replacement. I'm very happy with Phon and his crew. They usually have about five people working. The atmosphere is family and light hearted. Lots of laughing and kidding going on but they work hard all day. Phon speaks very little English but understands a lot more and his wife and daughter speak enough to get along. They have done a lot of boats and definitely know what they're doing. I have showed Phon the genoa tracks which are bolted through the deck and glassed over inside with cabinetry covering many of the glassed areas below. He assures me he can get them off and get them back on again. "No problem, many boats," with a laugh and a big smile. I'll observe his methods with great interest. 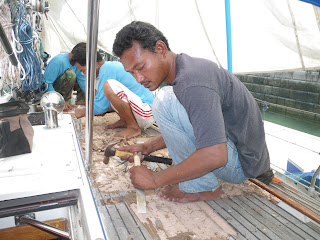 For you fellow Wauquiez owners I will say the teak deck removal process has been a confirmation of the quality of the original construction. These teak decks are twenty six years old and they are still stuck to the underlying fiberglass very, very securely. Every inch of teak has to be hammered and chiseled off. The adhesive is doing the holding. The screws come out quite easily in most cases and just held the teak down while the original adhesive set. In no place has here been any water intrusion into the glass and the decks are rock solid.  That's all very good but it also means having this work done somewhere where they billed by the hour at western prices would be a very expensive proposition. 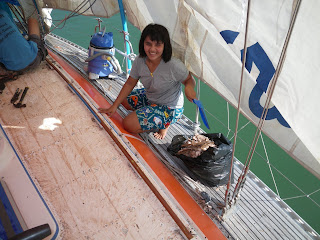 There are few more days of work ahead removing teak and things like genoa tracks. Then the decks will be prepped and primed and the installation process of the new teak decks will begin. Supposed to be a very interesting process. 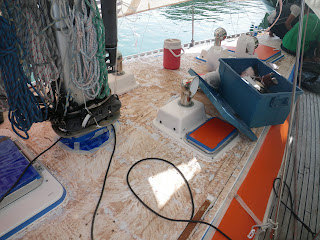 We have had excellent weather. A couple weeks ago it seemed the rainy season had begun early but other than the usual night time isolated thunder bumpers there has been no further rain. I don't have much to do with the deck work now that most of the deck hardware is removed. I've got a list of other boat projects I'll work on during the process. I'll keep  everybody updated.

Posted by Bill and Janet Wickman at 2:05 AM

Bill, I love your writing style. Phon has done a couple little things for me and I like him very much. -Tom s/v Rasa Manis

Liz and I are following everyone's blog now that Argonaut has a new home and we're dirt dwellers for a while. Putting teak back on? Most want it gone, gone, gone!
Happy trails & sails!

Glad to hear that you are happy with the work being done and the crew doing it. You made the right call shifting to Boat Lagoon. And to think they even have pizza delivery!
We are freezing up here in the Pacific Northwest. Not joking. It snowed yesterday not far from where we live, and next week I am going skiing at Mount Baker. Brrrrr...
Glen and crew

Hi, Uncle Bill,
Thanks for the photos and update. I can't wait to see the new deck!
:) Julie