Lordy, it feels good to be back at sea! Even if back at sea only  means motor sailing one hundred and twenty miles north  to Phuket. "Men and ships rot in port"  is the old saying. There's a lot of figurative and literal truth in that. 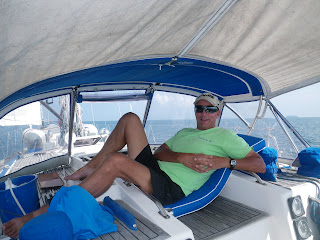 After almost a month at Phithak Shipyard we launched yesterday and are now en-route to Phuket and Boat Lagoon yacht basin. It's been a lovely trip so far. We had a nice anchorage last night off Ko Tartanao and the morning is sunny with just enough breeze to add half knot by motor sailing. And I say 'we' because I have Oonn, one of the yard foremen, on board as crew. He's a nice guy with a little English and a lot of local knowledge. 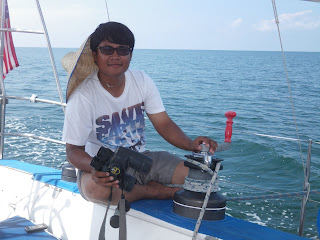 Boat Lagoon wasn't part of the original plan. But we have friends who are having work done there and they are very happy with the situation. The scene at Phithak had changed quite a bit since we visited last fall. The yard contractors, who are separate from the yard itself, have decided they can charge the same prices as Phuket. The yard manager, Oh, quit shortly after I arrived and the yard is in some chaos. I got the transmission out and found a Hurth service center in Phuket and took it up there on the bus, an eight hour ride each way. Our friends Walter and Tiggs from "Marnie" gave me the Phuket tour and introduced me to some contractors.  I expected Phuket to be a more developed Langkawi but found it to be more of a Bangkok wannabe, a very urban and bustling place, certainly not my idea of a tropical paradise, but with a very well developed yacht service industry. So I got my transmission in for repair, enjoyed running around with Walter and Tiggs and took the bus back to Satun.  And thought long and hard about the major project, the deck work. After witnessing a couple more yard screw ups at Phithak and literally chasing my transmission all over Satun when it was being delivered back to me via bus I said the hell with it and decided to have the major project done up at Phuket. The costs will be essentially the same with a lot less aggravation. 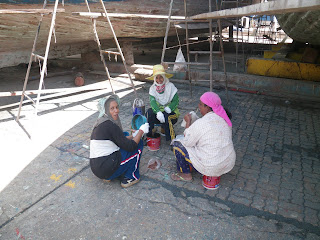 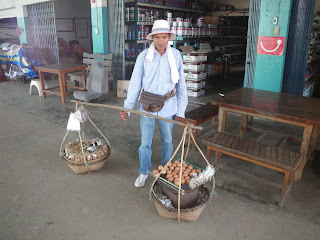 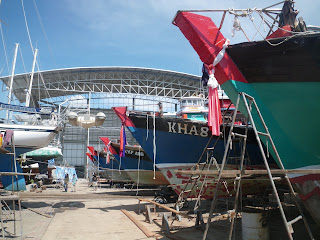 I got the transmission installed after some knuckle busting, put in the the new PSS dripless prop shaft seal, installed our shiny new Max Prop, had the bottom painted and the boat polished and launched. Not without some anxiety because all this installation work was done by  unskilled labor, me to be exact, and I was very happy and  a little surprised when the transmission transmitted, the shaft seal sealed  and the prop did it's Max Prop thing. Nothing has fallen off, so far, and the water is staying outside the boat. 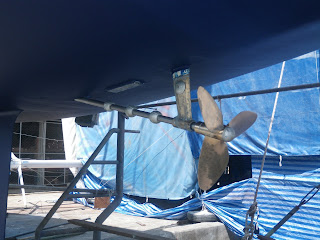 The town of Satun was a good experience. My dawn motorcycle ride out through the rubber plantations and through the small Muslim villages to the yard was always a joy. 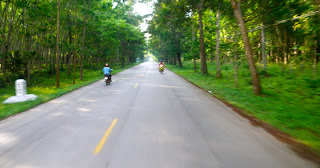 Satun itself got more interesting as I found my way around. The open market is one of the most interesting and lively markets I've seen, especially in the early morning. On's restaurant was a good hangout with fairly fast free internet and the BBC on the tellie. The bus ride up to Phuket was a kick. Nice bus but big speakers up and down the cabin  so that Thai rock music could be played at high volume during the entire eight hour ride to Phuket. After a few hours I had identified and considered three options to deal with the problem.  One, grin and bear it. Two, bus hijacking!  Dispose of the men and children, take the bus and the women, abscond up into the mountains east of Krabi and set up a private kingdom a la "Heart of Darkness". Three, suicide. Luckily time passes and inaction is sometimes the most practical course. 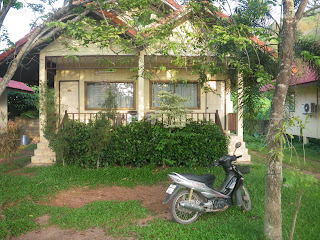 So now It's been another day and we anchored last night at an island just off Boat Lagoon to wait for the high tides later this morning. This is a lovely place and it's hard to believe the hectic Phuket scene is just a couple miles away. The motor sail up here was uneventful and sometimes really beautiful. Most of the Thai islands in this area are limestone karst formations which emerge vertically  as cliffs directly from the sea. They are like giant teeth hundreds of feet high and often have a closed or nearly closed interior lagoon. They are spectacularly beautiful  "James Bond" islands and we will do a lot of exploring after the boat work is done.

In a few hours the tide will be high enough to get into Boat Lagoon and the process can begin again. With a little luck this will all be done and the boat will one very spiffy machine by the time Janet gets here about the first of June.

Love to all,
Bill & Janet
SV Airstream
Posted by Bill and Janet Wickman at 5:03 PM

Bill,
We finally caught up with your blogs. I can identify with your short time home. Tom & I have decided to skip the sailing season this year & stay home - precisly for the same reason. It's been 10 years since we've stayed home for a whole year. We will however, return to Fiji in June for 2 mon. for boat projects. We may never catch up with you guys now! In the same vein, the capture of Quest devestated us. So staying home a year while the piracy issue hopefully gets worked out was timely (& unfortunate) in our decision. I'm sure you miss Janet terribly! It's the same when I follow Tom a few weeks later. It's great to read your blog & get all this info while your ahead of us. Take care & we look forward to your blogs.
Colleen & Tom
s/v Mokisha