I Can Watch These Guys Work All Day

Give them enough epoxy and some wedges and they'll glue  the world! 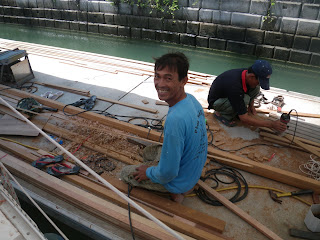 That the should be the motto of Phon Carpentering. What Phon and the crew can't do with teak, Sikaflex, some epoxy, a hammer and a wood chisel just doesn't need to be done. True, they use plenty of power tools. They have a power planer and  hand router and some Skil saws and electric drills and saber saws. But the real art in this job is the wood chisel and wedges. The dirty little secret weapon is Super Glue used here and there to hold things in place temporarily. 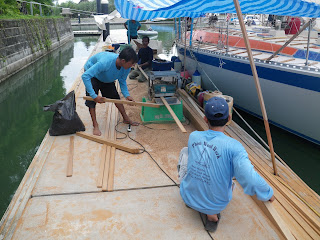 So allow me to explain the process as it is proceeding. There are a lot of things I'm still wondering about. As in, "Why do they do that?" . But all things are revealed as progress is made. It's probably best that Phon has not much English and I have a lot less Thai. I'm not bugging him with stupid questions. They seem to know exactly what they're doing. 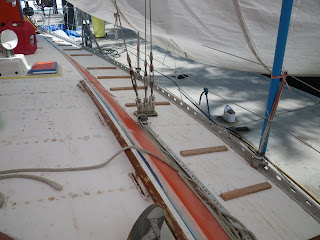 After the deck hardware and the old teak decks were removed they glued down 1"X 2" wooden strips a few inches long all along the deck perpendicular to the longitudinal axis of the boat. Then additional one by twos are screwed to the glued down strips so they can be rotated around. The deck area next to be covered with teak is thoroughly cleaned and then wiped with acetone, then Sikaflex primer and allowed to dry. Then Sikaflex adhesive is spread. 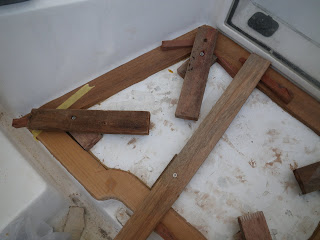 In the meantime the teak planks for the decking have been sawed out of teak boards and planed to exact dimension. They're one and half inches wide by 14mm thick. Except the ones that are two inches wide for trim. And that's the way the Thai's measure. They use a mixture of metric and Imperial as they feel is convenient. 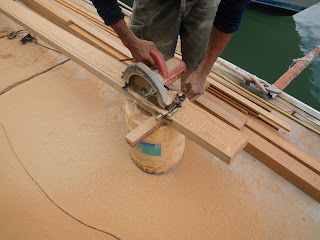 The teak is all high quality, dense and straight grained. People have asked whether it's 'plantation grown' or 'Burmese' teak and the answer is, it's from Myanmar, (Burma) wild, center cut teak.  Phon had rejected two different loads of teak before the job started and nothing which isn't really good is going on the boat. So every board is carefully prepped and matched with it's neighbors before being put into position on deck. 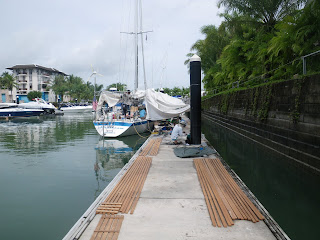 Of course the deck is curved both longitudinally and vertically. There are no straight lines. So the boards are bent into place and forced down onto the adhesive and the deck by wedges driven around the wood strips on the deck and the boat structures. 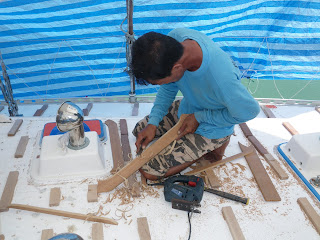 If things are stubborn they're levered into place with a wood chisel and a hammer and secured with more wedges. It becomes very precise and a few taps here and there on the hundreds of wedges and the boards are beautifully aligned. 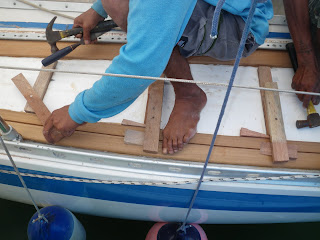 So that's what I've seen and  understand so far. I've got some questions about how it's all going to come together and how some curves will be merged into other curves. I'm kind of along for the ride and enjoying the show. I have a good feeling about what will become the finished product. 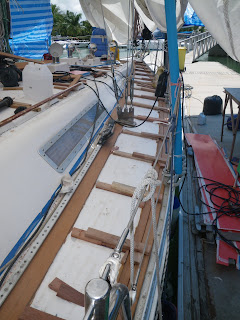 The stainless steel work for the new biminy is done and we'll have a final fitting tomorrow. The new upholstery is selected and ordered. The galley counter tops and fittings will be a Corian type product called "Lucrite" (not lucite) and the faucets, etc, will be brushed 304 stainless from VRH. 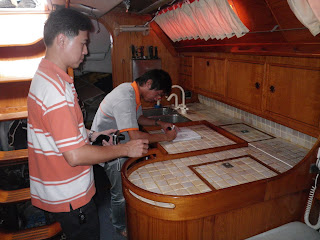 The hope is to get all this stuff completed by the first of June. Life here is OK. Phuket is not my cuppa tea. At least not what I've seen. But I had to make a visa run to Myanmar which was interesting and put another stamp in my passport. Two weeks later I made the major visa run down to Penang and enjoyed seeing Tim and Ruthie of "Victory Cat" for a couple evenings. Now my Thai visa should be good until late August. Don't ask about the Thai visa rules unless you really need to know. For a nice country they've got some weird ideas about visa regulation. 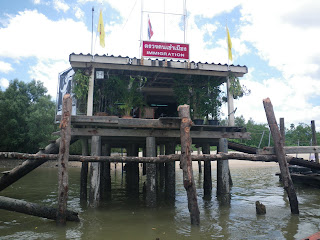 All the best to everyone. I hope this teak installation process isn't too boring to read about. It's pretty darn interesting to watch. Unless I hear, "Stop! Enough! No more!" I'll keep you updated.

Love to all,
Bill & Janet
Posted by Bill and Janet Wickman at 2:11 AM

Bill and Janet,
Always great to get your updates... Can you please keep them as negative as possible since Paul and I are really missing the cruising lifestyle??? LOL. Just kidding. Can't believe we've been back a year :(. Already thinking about the future. Hugs and kisses to the two of you.
Michele, Paul and kiddos
Formerly on S/V FreeSprit.

karli says please no more boat babble!!! when will jannet be posting?