We've been in Singapore more than a week now. One15 Marina is going to be hard to leave. And the city itself has not disappointed us. I had pitched it to skeptical friends as one of the most modern and dynamic cities in the world. Our expectations have been exceeded. 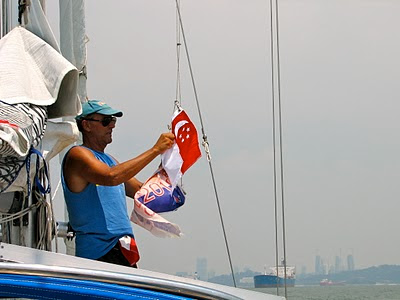 I sit now in an deeply air conditioned bar/business center, having finished a good lunch, with a wide screen high definition TV on the wall and very fast free wireless internet. Outside is a posh marina surrounded by luxury condominiums, swimming pool, good gym, big 7/11, and several restaurants. Berths are quite reasonably priced. Beer and food is not. The marina has every convenience and the staff is as helpful and efficient could ever be hoped. The great city of Singapore is a few minutes away by clean, fast,  free, air conditioned bus. 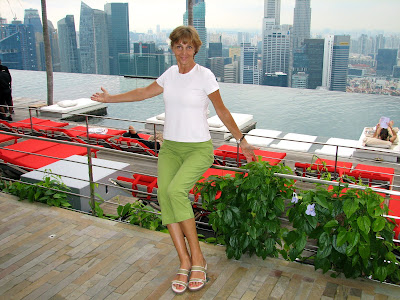 And Indonesia is just across the straits! How can it be? The cultural disconnect is amazing, befuddling and difficult at first to comprehend. As much as we enjoyed our experience in Indonesia we are people of the modern affluent 1st world. We had pretty much gotten  used to  that other, 3rd world, reality. Logic has nothing to do with it of course. But it's strange to be back. Kind of like coming in from a few weeks in the bush to central heat, a soft bed, a hot shower and clean sheets. 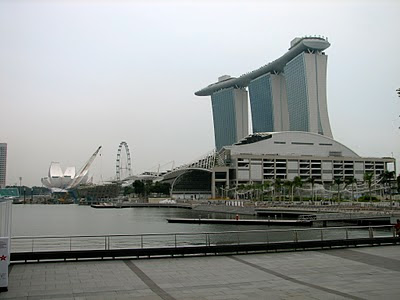 The voyage up the Selat Riau at night was interesting. Several very large freighters were at anchor in the middle of the strait being serviced by lighters and loaded/unloaded into pretty darn big local freighters and it was hard to figure out what was going on with the lights and on radar. As we got closer the situation became clear but it wasn't a sleepy time. By the time we got to the Singapore Straits it was daylight and crossing the strait was no disappointment. We had two super tankers coming one way, two big freighters coming the other and a cruise ship and another freighter coming out of the estuary across from us. We had more tonnage, closer, in five minutes than we've had anywhere near in the last three years. But there was no horn blowing and everyone seemed unconcerned and it all went well. Very exciting.

We had planned to go to Raffles Marina but heard good things from another boat just before the crossing that convinced us to try One 15 Marina. We were only a few miles away and it all worked out very well and we're glad we made the choice. Access to the city from here is much easier than from Raffles. 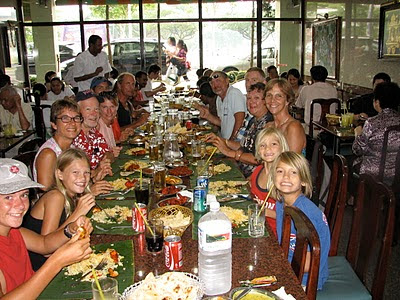 Tin Soldier, Baraka, Linda, La Palapa  and others came in over the next few days so we have our friends to play with again. We've gone out to dinner in Little India, had drinks (very over priced drinks) at Raffles Hotel, hung out at the pool, got to know the MRT (the subway) entirely too well, spent too much money and enjoyed the city life. 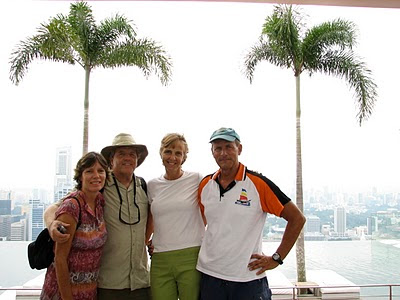 And Singapore is booming. It's always been changing but the pace of change seems to be accelerating. In the three years since we were last here there has been major construction everywhere around the city and the Sands Marina Resort complex is astounding. We went there yesterday with Glenn and Marilyn of Tin Soldier and were typical tourists. Glenn compared the energy here to Manhattan and although I had previously thought only Hong Kong could approach the New York, downtown Manhattan energy level what we've seen these past few days in Singapore, I have to agree,  is  powerful stuff. Very interesting.

We plan to depart the 29th and that will be a hard departure for several reasons. We like it here. We have friends who are going other ways and we may not see them again for a long time. And for me Singapore always has evoked the best feelings about my flying. I came here flying an airplane I loved with great guys  to a city worth going to and that we had time to enjoy. It didn't get much better than this,  and that I fondly remember and I miss. 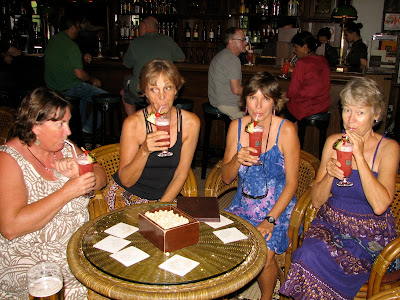 But the boat is fueled up and our auto pilot and water maker problems are fixed, I think, under warranty and my other boat jobs are done. No excuses not to press on. A bunch of us are going out to the zoo and the Night Walk at the zoo tomorrow. Janet's doing Orchard Road this afternoon. It's been suggested I should show the boys the other side of town. I think we should take the girls.

Posted by Bill and Janet Wickman at 1:06 AM