Up the Straits of Malacca

Leaving One15Marina  in Singapore was cause for many regrets. We parted with friends  we won't see for entirely too long. The marina itself was over-the-top luxurious and very, very comfortable. Easy access to one of the great cities of the world was something we all enjoyed. 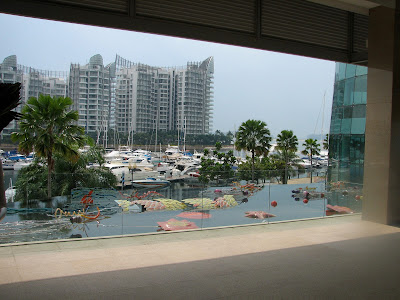 We could have stayed for a long time. But the plan had always been to be home by the middle of November and we weren't willing to forgo the plan. Ergo, time to move on if we wanted to see some of Malaysia this year. 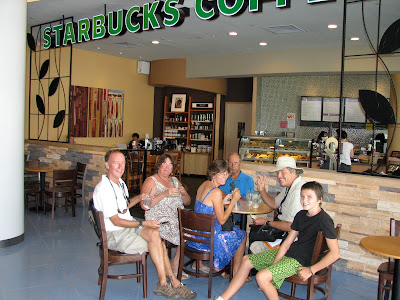 So we left about 0700 the 30th of October, cleared the customs boat and made our way through the incredible anchorages along the western approaches to Singapore. The number of cargo vessels at anchor, on the move to and from the cargo handling facilities or on the docks or the fuel facilities and refineries is hard to believe until it's been encountered. 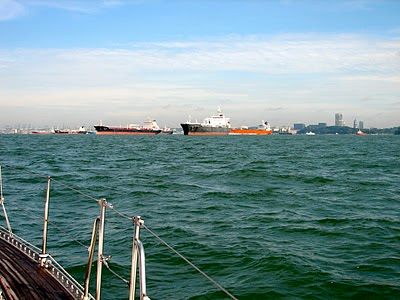 The facilities go on for miles and miles and miles. The paper nautical charts cannot keep up with the rate at which the Port of Singapore is filling in land around the port to create more cargo handling area. Our electronic charts seemed reasonably accurate. We really didn't clear the anchored shipping until well up into the Straits of Malacca. Our destination was Admiral Marina, Port Dickson, Malaysia about a hundred and fifty miles north. We had almost no wind and since the enroute shipping was still passing us at a steady stream we were motoring again rather than tack around in the shipping separation zone day and night. 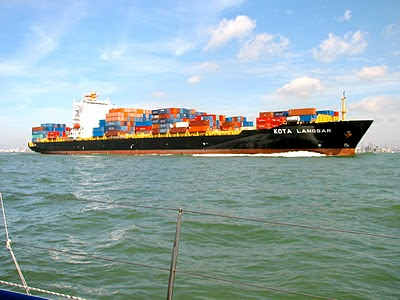 We stayed at the extreme eastern side or out of the separation zone to the east. Most shipping passed us well to port but there were barges under tow and local vessels with us on the east side as well as the ever present fishing craft. All in all keeping a "proper watch" meant REALLY keeping a proper watch and the radar and binoculars got a good work out day and night. We had one fast car carrier come up from dead astern and swing over to pass us on starboard. The relative speed differential worked out to 18.4 knots which means he was doing 25 knots. That's really moving for a civilian vessel, any large vessel.  Probably the reason he was out of the separation zone. We spoke to him on the way past and he was carrying cars to Port Klang, undoubtably meant for sale in Kuala Lumpur. 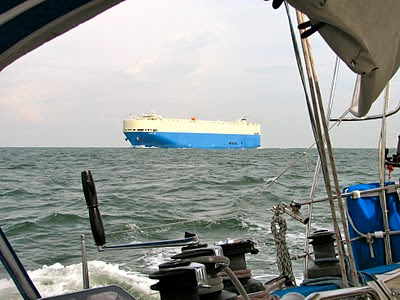 So we arrived at Admiral Marina just south of Port Dickson as planned. The marina was very nice although they are doing a lot of dock refurbishing and many slips do not have shore power at the present time. We enjoyed the nice marina facilities and went into Port Dickson to check through customs, etc, into Malaysia. 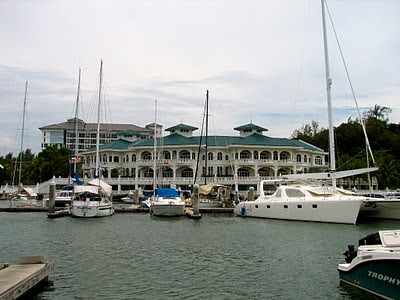 Everyone was very sweet and the process was easy. We spent a couple days at the marina eating good Indian food nearby. The first impression of Malaysia is that it's an interesting in-between place. In between the modernity and flash of Singapore and the third world chaos and poverty of much of Indonesia. The population is largely Muslim but didn't seem particularly conservative. People were as friendly as they could be and very welcoming. There does seem to be an element of financial chaos. It's common to see a very elaborate resort or housing complex, obviously built at great expense with grandiose expectations, to be sitting pretty much unoccupied and looking run down after only a few years. I think the Malaysian 'boom' of a decade ago had a little problem. Of course, where else did that happen? 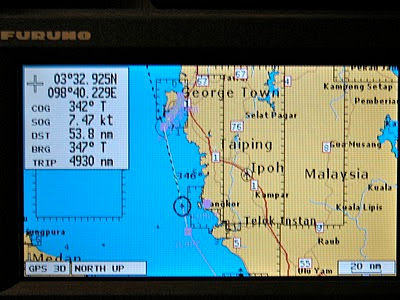 It was another over nighter up to Penang. And conditions were similar. Motored the entire trip. There was less shipping, especially after passing Port Klang, but more fishing activity and we're beginning to see a lot of Thai purse seiner type fishing craft. Penang is a big and modern city and has aspirations of becoming Singapore. It may just do that, it's a busy and happening place. We spent a few nights at the Tanjong City Marina at Georgetown which is the historic old part of the city. The marina is quite nice despite the nearby ferry terminal. 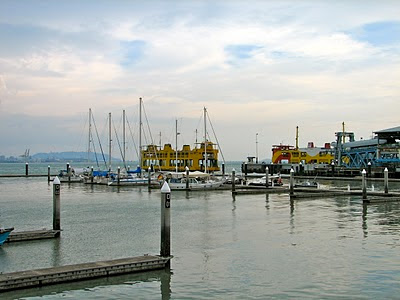 It has a reputation for getting extremely rough during any kind of strong northerly wind but we never had those conditions and were very comfortable. The Georgetown area is fascinating, a combination of a large Little India, Chinatown and old colonial city. We ate, in my opinion, the very best Indian food I've ever eaten and I think Janet agrees. 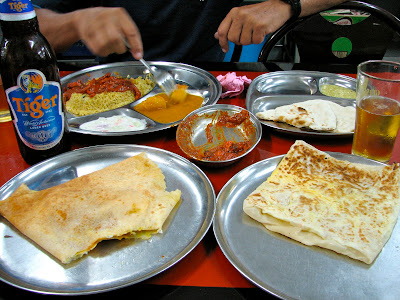 That weekend was the end of the Hindu New Year festival and Little India was packed until the actual 'day' itself. Then it was a ghost town. Hard to believe. Another 'hard to believe' was the noise level of the QE II bar near the marina on Friday night. It had not been a problem all week, no sound at all, but at 2300 on Friday they kicked in the disco and blasted the surrounding area until 0200. We were plenty uncomfortable on the boat a couple hundred yards away. How anybody inside the building could survive is beyond me. 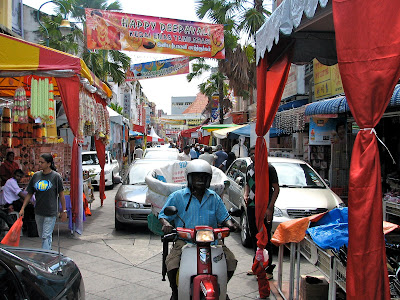 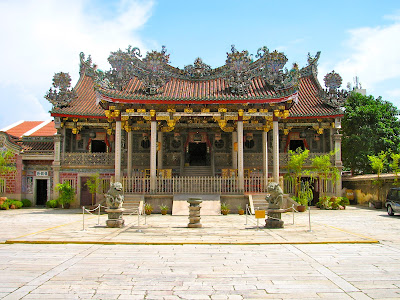 The plan was to push off that morning for Langkawi. After that little serenade we left with no regrets on the 6th and, again, motored the sixty miles up to Langkawi in very calm conditions. We spent a night at the Royal Langkawi Yacht Club marina. It's a nice enough facility but considerable noise and chop from the ferry terminal nearby and a LOT of current when the tide is on the ebb. 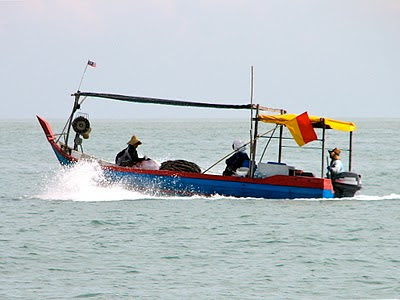 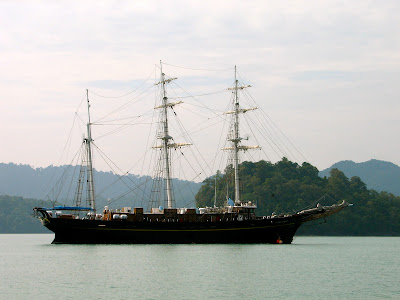 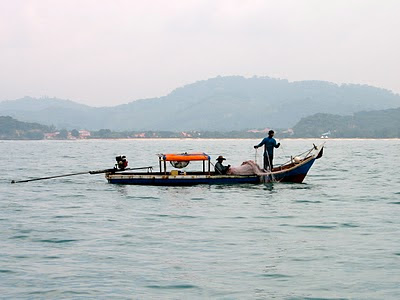 We checked into Langkawi, hit the Mac Donald's at the mall (yetch, but it had to be done) and were generally surprised by both the physical beauty of the islands and the level of development. There's considerable hustle and bustle around Kuah, the main town, big resorts, malls and the usual tourist support paraphernalia. We moved the boat over to Rebak Island the next day. 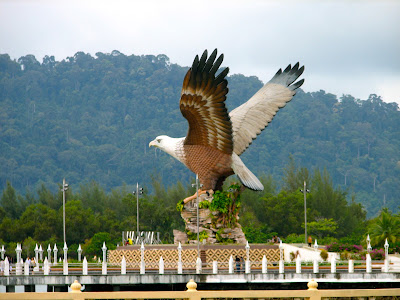 And Rebak is truly a lovely place. The island is owned by the Rebak Resort hotel which is part of the Indian Taj Hotel chain and is very much the posh property. The marina itself is sheltered by forested hills to the extent that it can't be seen until inside the entrance passage. 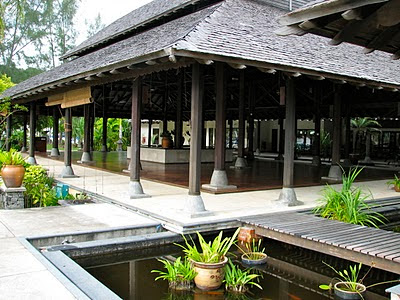 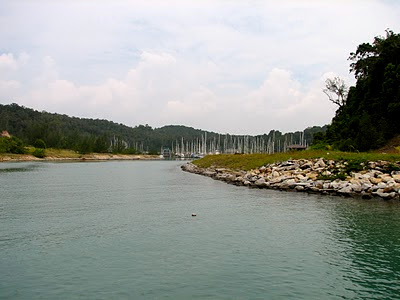 The slips were destroyed by the big tsunami in 2006 but only one boat was lost and no one was injured. As a result the slips are new and very nice. The whole facility is very yacht friendly. The resort is open to yachts staying at the marina and the lovely pool and pool bar beside the nice beach in the quiet and beautifully landscaped resort makes for the kind of place the average yachtie can stay a long time. And that's exactly our plan. 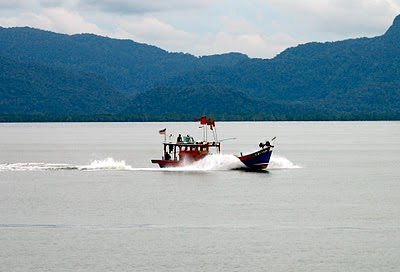 We took a day trip over to Satun, Thailand to check out the Phithak Shipyard with Carl and Kathleen Cox, fellow Wauquiez sailboat owners. The shipyard was a friendly, busy place full of Thai fishing boats but also about half a dozen foreign yachts having major work done. We left very favorably impressed. 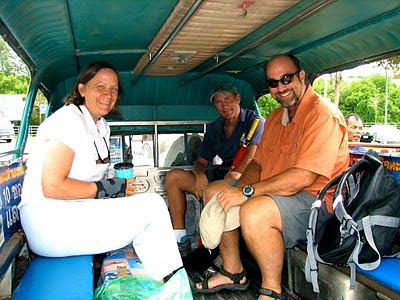 So here's the plan: We have left the boat in the water at Rebak Marina. I'll return in March to take the boat over to Satun and supervise the work we intend to have done. This will be at minimum removing the teak decks and having the deck glassed over and painted. We may have some interior teak work done. We may have salon cushions recovered. We may have galley counter tops replaced, etc, etc. This should take a month or two. 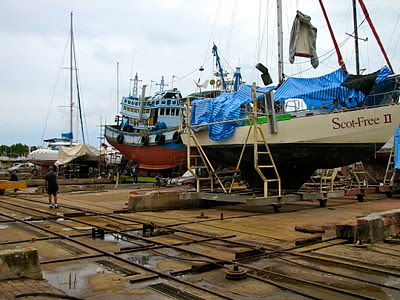 I'll return the boat to Langkawi and may return home for awhile or Janet may come out to travel around SE Asia. We will use the remainder of the year to enjoy SE Asia one way or another. Come January of 2012 we'll catch the monsoon across the Indian Ocean to Sri Lanka and India, then across the Arabian Sea and up the Red Sea to the Mediterranean. That's the long term plan. Stay tuned please. 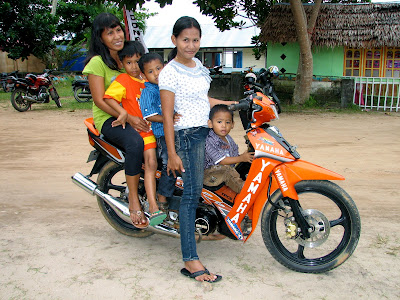 So now we've been home a couple days. The jet lag is wearing off. We had great flights and a good trip home through Singapore and Tokyo. I spent a night at the Radisson International Hotel at Narita, Tokyo which has always been our layover hotel. Over the years with Northwest I  spent over 700 nights there and it's close to being a  home. Since we have about three hundred crew members there on any given night the chance of running into old friends is pretty good and I was not disappointed. Janet is delighted that our house sitter left the place so nice and clean and spiffy. We're both a little amazed to be back after the adventure over the past eight months. 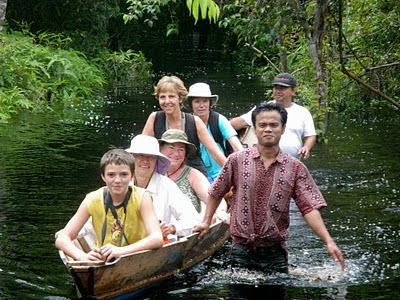 We had a great season. The sailing up the east coast of Australia was very good. The reinforced trades blew as forecast and all we had to do was keep from hitting anything hard. The voyage across the top to Darwin was rough but fast and safe. 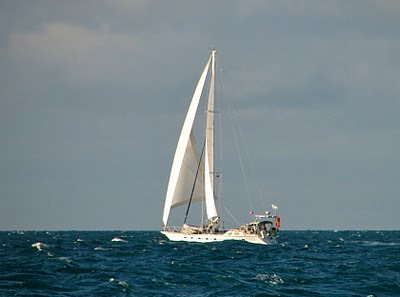 The sail up to Kupang was lovely. Indonesia was a cultural experience which will always influence our thinking and the places and people we got to know were unforgettable. Singapore continues to amaze us with it's capacity for growth and change. The cultural contrast between Indonesia one day and Singapore the next was difficult to comprehend and accept. Malaysia has been beautiful and friendly. We'll be back there and into Thailand and more of SE Asia next year. 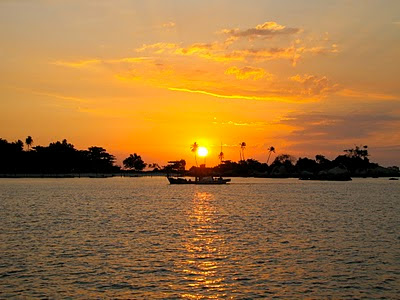 So thank you for following the blog this year. We'd love to read your comments. We'll be back on again in a few months. For now Janet is eyeing her next move in the gardens and I'm working on shooting my age at golf. A 63 isn't likely right now. But every year I'm getting closer.


Posted by Bill and Janet Wickman at 8:15 PM