Sumbawa, Komodo and the Dragons 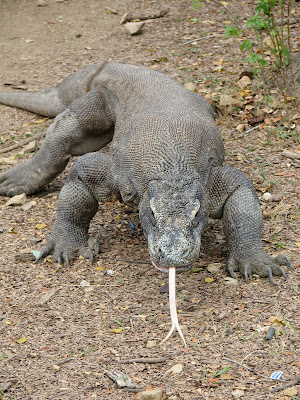 Sumbawa, Komodo and the Dragons
SUM-BA-WA! I love that name. Right out of an old Tarzan movie. SUMBAWA, CHEETAH! Anyway, we're five miles off the north coast of the island of Sumbawa west bound for Lomboc and Bali. Last night at our anchorage there were Asian buffalo feeding along the beach. Now its a lovely morning with 15-18 knots of southerly breeze pushing us along at 7-8 knots under 150 genoa alone with an easy following sea. It doesn't get much better than this. Janet's making up a pizza dough for dinner tonight and has the watch. It's time for me to update the blog.

Sumbawa is described in Lonely Planet as very poor, conservative and Muslim. It's also drop dead beautiful, mountainous, and geographically contorted with deep bays on the north coast. It's about 150 miles east to west and we've got about fifty miles to go to our planned anchorage tonight at Medena Island off the far northwest corner of Sumbawa. On our beam to the south, rising directly from the sea, is the 10000' massive broad based volcanic cone of Mount Tambora. This volcano used to be 13000' until 1815 when it blew up killing about everybody on Sumbawa and causing the"year without a summer". There was enough dust from the eruption in the atmosphere to significantly reduce the summer temperatures almost everywhere in the world. Now the mountain is lush and green with some subsidiary cones from more recent eruptions and there are some villages along the shore. We've seen no sigh of tourism or development of any kind since leaving Labuan Bajo a few days ago. 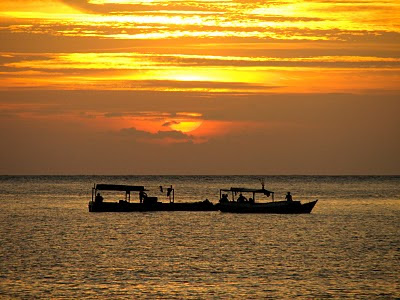 Labuan Bajo was the most developed place we'd seen since Kupang weeks before that. It's still a dusty, gritty, trashy, chaotic Indonesian port town but it's beautifully situated and the gateway to the Komodo Island group. Since Komodo is famous for the Komodo Dragons and since there is truly great diving and since the area is just so darn beautiful it is on the tourist map, for fairly adventurous tourists, at least. We spent a few days anchored off the beach at the Bajo-Komodo Eco Lodge. The lodge is a classic Indo-neo-colonial style building with a nice pool and eight lovely rooms, good food, cold beer and a very sweet staff. We spent the first night ashore since this years voyage began back in May and felt quite pampered and civilized.

But it was dragons and diving we were really after. The best dragon viewing is actually supposed to be on the island of Rinca just east of Komodo so that's where we went. Sure enough, many dragons seen on a little two hour nature walk guided by the park staff on Rinca. The biggest Komodo Dragons we saw were around nine feet long. Pretty darn big for a lizard! And they seemed to be most active in the morning before the full heat of the day. Janet got good photos, which we hope to be able to upload soon, and the critters themselves are as impressive in person as we had hoped. No one with us got eaten.

The diving was also very, very good, I'm told. I busted an ear drum on the first descent and had to abort the dive. My diving is over until this thing heals up, probably in a few weeks. It's the third time I've broken the left ear drum since the first time back in the service and I'm entirely too familiar with the process. It'll heal. Janet and friends had some great dives with many big fish in great visibility and wonderful coral. One pretty experienced guy said it was the best he's ever seen. 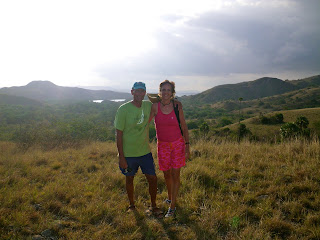 The Komodo Islands themselves are very beautiful and the beauty is of a much different character than Flores and further east. We had a couple of the most memorably beautiful anchorages we've ever enjoyed. As we've moved west wards the northern sides (the leeward sides) of these islands have become more and more treeless, more grassy and arid in appearance. The Komodos, this time of year at least, look like the channel islands off Southern California or the west coast of Mexico. They are mountainous and gorgeous but not the lush forest we expected. The whole Komodo area is like an inland sea with many small islands in protected waters and a great cruising ground. The only other yachts we saw were those of some friends more or less on the same schedule as ourselves. It's a great place but services are pretty basic and for the land based tourist, with the exception of the Eco Lodge and one other spot, it would be primitive.

So the plan is to anchor for the night at Pulau Medang, 08.08.58S, 117.22.39E, with friends on "Victory Cat" and "La Palapa" who have already arrived. We'll all get a very early start (like 0200) and head for the Gili islands off NW Lomboc. That's supposed to be real civilization! They supposedly have a "yacht club" with that wonderful convenience we haven't seen since Darwin, a "dinghy dock". We also assume they have cold Bintang and other luxuries. Depending on what we find in Lomboc, and it's supposed to be a beautiful and interesting island, we'll eventually move next island over to Bali where civilization truly lurks. Maybe even, believe it or not, free wifi!
Love to all,
Bill & Janet
SV Airstream
----------
radio email processed by SailMail
for information see: http://www.sailmail.com
Posted by Bill and Janet Wickman at 4:29 AM