We've been in Lomboc several days now. It's easy to lose track of time out here and I'd have to look at the log book to know if it's been four days or six days, etc. The voyage across the north coast of Sumbawa was lovely and without difficulty except for a lack of wind. We did a lot of motoring. Whenever we'd get to leeward of a channel or low terrain the SE trades would break through and we'd have a lovely sail for a few hours but then these really high volcanic peaks would obstruct and we'd be back to the engine. 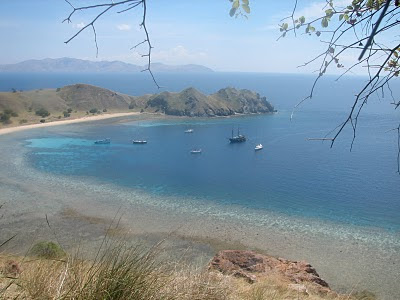 And we're not really anchored at Lomboc at all. We're off Gili Air, one of the Gili Islands just a few miles NW of Lomboc and actually offering better anchorages and services for boats than most of Lomboc. Gili Air is only a couple miles around but tourists from Bali take "fast boats" here to see what the real world of Indonesia is all about. Actually what they see is an Indonesian fishing village in the early stages of becoming a tourist beach town. There are a number of modest restaurants on the beach and some dive operations and a couple places offering tourist bungalows. Gili Trawanagan a couple miles west is more developed and known as a party island. I took the dinghy over there a couple days ago but, although there are a couple nice hotels, it was mostly ticky-tack. The local folks here at Gili Air are very nice and there are a couple small markets and, wonder of wonders, wireless internet from one of the dive operations. Some of our cruising friends, LaPalapa, Heart Song III, and Victory Cat, are here and we've been socializing with them. 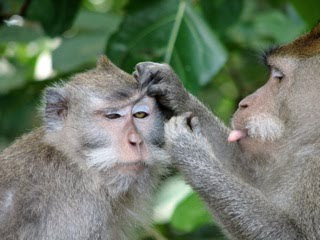 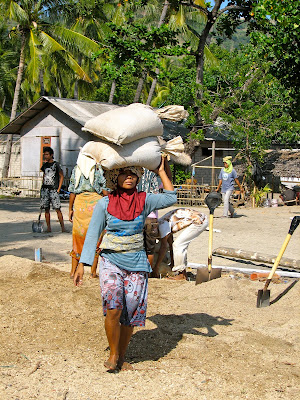 Yesterday five of us took LaPalapa over to Lomboc, went ashore, got a car and driver and drove around Lomboc for most of the day. What we saw of the island was a study in contrasts and a bit of a microcosm of what we've seen so far in Indonesia. Bangsang, where we went ashore is a commercial beach where Islamic women were carrying bags of rice through the water on the their heads to load into a boat, bag by bag. The town itself is crowded and raucous and horse carts are the main form of public transport (as they are on the Gili Islands, no motor vehicles on the Gilis) but there are cars and many, many mopeds and small motor cycles. The highway over the mountains to Mataran, the capitol of Lomboc, is narrow and winds up a mountain range through dense vegetation with monkeys lining the guard rails and relaxing in the trees over the road. Mataran itself is partly modern city and partly what we've seen all along the coastal cities of Indonesia. But it's in transition and they have a big modern mall in the heart of town with about everything you'd expect to find in a big Asian city mall in the way of many electronic shops and a modern super market. And Kentucky Fried Chicken. And McDonnell's! We all ate at McDonnell's and although I could never say it was really good, I was a really fun thing to do. Not something I expected to see until Bali at least.

We went to a couple temple complexes, Pura Lingsar was interesting and lovely and Surangadi was rather sad and run down.  The country flat enough to farm was in terraced rice paddies or vegetable gardens. The architecture has changed from bamboo woven huts to mostly masonry walled small homes with tile roofs. The old Dutch colonial influence in much in evidence in older buildings and walled compounds. Although this is still very much a third world place it's much more prosperous than further east. 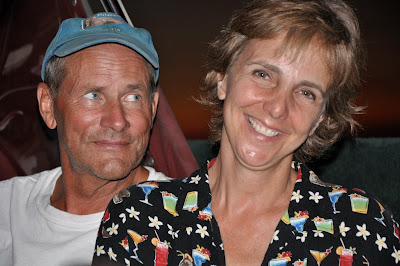 From a nautical viewpoint it's most interesting to see the change in water craft. The boats are still wooden double outriggers but they're larger and built to hold as many tourists as can be packed into them on a nice day. And, most striking, the old one lung gas engine has been replaced here by modern outboard engines. The Yamaha 40 outboard we saw everywhere in Polynesia is again the king of beasts. All boats are freshly and brightly painted. New boat construction is in progress on the beach in front of us. They're planking up a sixty foot launch as a write. 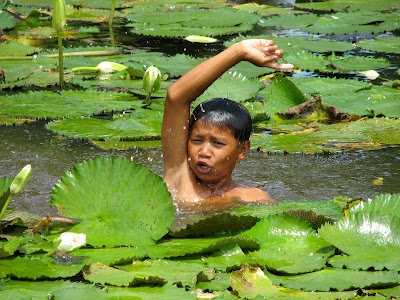 Tourism is the reason for this relative prosperity. Lomboc is close to Bali and just as beautiful. Bali is long discovered and Lomboc and the Gilis are getting the fallout from those who wish to see beyond the Bali scene. There's more money in evidence everywhere. There's more foreign language spoken. There's actually been some training of staff at restaurants and bars. And although there's still plenty of poverty, by our standards abject poverty, these people have a lot of hope and energy and they want a slice of what the outside world has to offer.  Actually the Gili's are a very nice place right now, whether they go really tacky or really nice will depend on things beyond my understanding. But it's very interesting to see this transition taking place.

So, probably tomorrow, we'll say goodbye to the Gilis and head over to Bali. It's about sixty miles to the anchorage at Serangan and the current should be with us most of the way. We have reports of many things from Bali, good and bad, and it's certainly on the major tourist destination list. The plan is to spend a few weeks in Bali depending on how much we like the place. We may even wait for the rally boats to catch up. But we'll certainly do some serious land travel around the island. My ear is healing up and I hope to be able to do some diving in a few weeks. We've got some regular boat jobs to do. We're slowing down for awhile and more friends should be arriving in the area gradually.

Posted by Bill and Janet Wickman at 6:14 PM