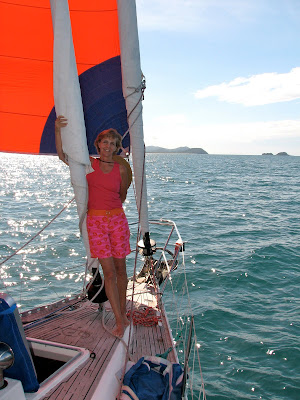 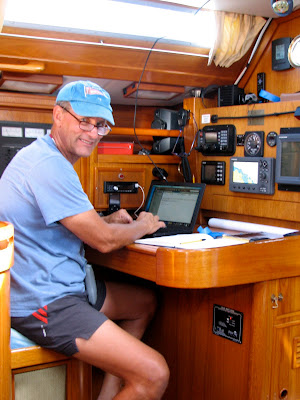 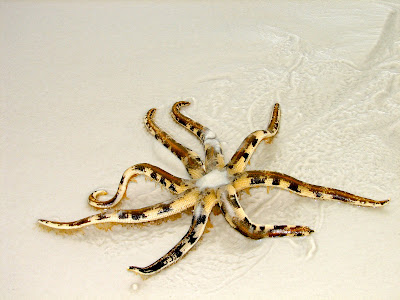 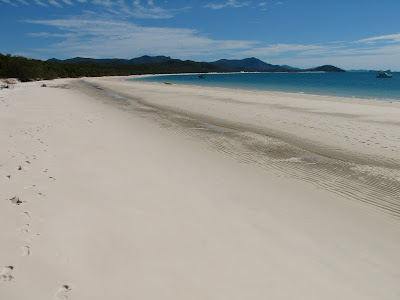 We're in Cairns luxuriating in cruiser heaven. How be it so? In the Marlin Marina in Cairns the showers and toilets not only have unlimited hot water, they are not only clean and convenient, they are down right elegant! Elegant I say! And they're right near the bar, which has it's own Aussie style of open air elegance. And right next to the Shangri La Hotel which is so darn elegant we haven't even bothered to dress up enough to feel comfortable entering the place. So, although Cairns is a world renowned tourist mecca and not the kind of place self reliant and adventurous yachties  brag about ("...there we were, hove to in the lee of Muckity Muck Island, not another boat for a thousand miles..")  we like it.

We arrived here yesterday, the 5th of June, after a blur of anchorages and passages up from Mackay. Thomas Island, Shaw Island and Whitehaven Beach, Hook Island and Butterfly Bay, Airlie Beach, Cape Upstart, Magnetic Island and Horseshoe Bay, Townsville, Orpheus Island, Dunk Island, Mourilyn Harbor, Fitzroy Island and Welcome Bay and finally,  Cairns. It's about 450 more miles up to Cape York and the passage through the Torres Straight. We hope to be around the Cape by the 3rd of July for a four or five day sail to Darwin.

So looking back on the blur what stands out since Mackay? Whitehaven Beach on Shaw Island (the Whitsunday Island group) is the finest beach  either of us has ever visited. Six kilometers of firm white almost silky sand. And you can have about a click of that entirely to yourself anytime you want. Airlie Beach and finally getting a long standing electronics problem isolated and fixed. And meeting up with Tin Soldier and Glenn, Marilyn and Jaryd there for the first time since last year.  Socializing with Roger and Jan on La Palapa, Christine and Jeff on Moana Kuewa, Dave and Jan on Baraka, Walter and Tiggs on Marnie, Scott and Debbie on Viva,  a walk about in Townsville and the maritime museum there and getting further education in "Mexican Train" from Scott and Debbie. Watching the Sulfur Crested Cockatoos roost in the trees off Butterfly Bay. And we've had some great sails. Since our course is pretty much NNW and since the southeast trades blow very consistently across the coral sea and since we're inside the Great Barrier Reef we have a nice down wind or broad reach with no swell and only whatever wind waves the 10-25 knot  trades can generate. It's been some of the nicest sailing we've ever had and the cruising spinnaker has been getting a work out. With a little luck this should continue up the coast, across the Gulf of Carpentaria and into Darwin.

And what's gone wrong? The  #1 VHF microphone died yesterday. The miniature switch inside the two year old radio mike broke off it's circuit board and it isn't a fixer. We'll see about that tomorrow when the shops open. We spent a night in Mourilyan Harbor which was a pleasant raft up and social evening with Viva but got eaten alive by the sand flies. Or at least everyone but Janet did, she seems impervious to sand flies.

And our friends Cindy and Mike on Airwego lost their boat on a reef in Samoa. That's not a "gone wrong", that's a tragedy. They weren't  seriously injured and I believe they may be home by now but we feel so bad for them. That's the fourth boat we've  known and cared about to go down in the last three years. It's a very sad feeling.

And what's the plan? Good question. Right now we're discussing whether or not to spend more time in Cairns and do some diving with local operators here or whether to push on towards Cooktown and Lizard Island. We may wait for Tin Soldier to show up here and then rent a car with them and drive up to Cooktown next weekend. That's when they hold the annual re-enactment of Cook's arrival. He careened  Endeavor there after running her up on a section of the Great Barrier Reef (now called Cook's reef, naturally) and managed to get her back in shape to continue. It was a very close call for Cook. The re-enactment has a reputation as a classic Aussie excuse for a drunken brawl so we may have to go and at least watch.

And speaking of Aussies I must say that my initial impression has been confirmed over and over again. They are the most friendly and open of peoples. We've experienced nothing but good hearted kindness and humor from them. They're a good bunch.

Right now Janet is walking round town on a little exploration. I've done my boat jobs for the day, which were, just to give you an idea, service the house bank batteries, re-glue a velcro strap on a hatch, secure a motor mount and further refine the engine alignment (a big success, by the way) and inspect the steering cables and quadrant. We may go to a movie tonight with Viva. We ate Indian food last night which was quite delicious. Life is good.

PS: We may not be able to post an update for awhile, till we get to Darwin. For those of you interested in following our position  you can go to:  http://www.pangolin.co.nz/   On the left of the page there will be a number of buttons for Quick Links. Click on "Reporting Boats" and a page will display a list of reporting boats by "Yotreps ID" and "Boat Name". We are "KI6IKE" and "Airstream". Scroll down alphabetically  to KI6IKE and click on the "Position Track" on the right and a Google Map will come up with our last reported position. You can zoom in or out to see more positions.  There's a lot of interesting stuff on the pangolin website as well.
Posted by Bill and Janet Wickman at 10:42 PM