The great Bundaberg hostage crisis is over. Janet arrived as planned. We're up the coast a couple hundred miles in Mackay. The weather has been beautiful.  The sailing has been great. Life is good. 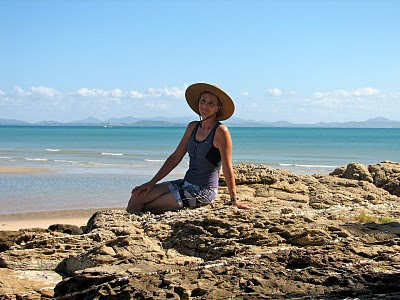 Getting out of Bundy proved to be a bit of a trial. The main project to be accomplished after the boat was back in the water was getting the new auto pilot installed. I wanted this done by the time Janet arrived on the 14th of April so that we could depart after she had a few days to settle into the boat. It didn't happen. The guy doing this was very decent, experienced and skilled but also very busy. We got a couple hours of his time every other day or so and the installation was not a simple affair. When the job was complete we ended up waiting another week for a new  masthead wind transducer (the old one had failed) to arrive. When it did arrive it worked about twelve hours. ARRRRGHHHH!   Bundaberg was a nice enough place and, as always, the yachtie camaraderie was very good. Friends on First Light III, Tamorae, Viva, Lizzie, Monkey Fist, and la Palapa made it fun. But this last delay was just too much. We had to ask our good friend Dean Jacobson, who had planned on meeting us in the Whitsunday Islands, to come to Bundaberg instead because we couldn't get to the Whitsundays as planned. When he arrived we departed the next day. And it was a great relief to finally get going three weeks late. 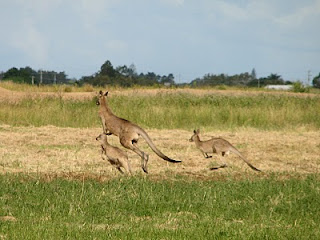 So, for those who might be interested,  we now have a new Raymarine SPX-30 autopilot with a ST6002 control unit,  a Smartpilot wireless remote controller, and T2 hydraulic linear drive. The largest drive they make, the T3, wouldn't fit and shouldn't be necessary. The system works great and we've had the opportunity to give it a fairly good workout in 25 knot winds and six foot choppy seas off the quarters. It steers wonderfully using only a small portion of it's response capability. It's far stronger than the old B&G ever was and we have hopes for a long and loving relationship. This year especially we plan on using it a lot more than the wind vane because of the many short passages we anticipate. We're still working on getting the wind transducer. We will have that thing going again, soon. 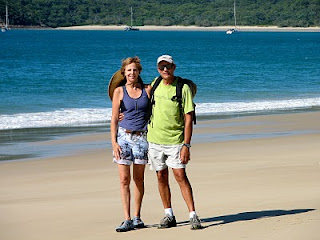 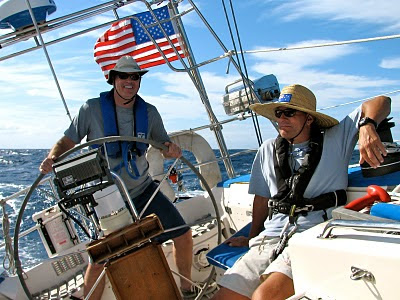 We left Bundaberg about 0400 the 7th to arrive at Lady Musgrave Island in decent light for the very narrow entrance into the reef. We had 20-25 knots off the starboard quarter and a lovely sail. Unfortunately the winds kept up through the day and night and there didn't seem to be much point in sitting inside the reef in the wind so we departed the next morning for Hummocky Island. Another day like the previous brought us into Hummocky after dark and another rolly, windy night had us moving again to Great Keppel Island. We had a lovely anchorage at Leeks Bay on Great Keppel and spent two nights. We hiked the island and enjoyed the beaches and the bird life and the incredible butterflies. The trades had lightened up a little and we had a motor to Port Clinton for a very quiet and protected next night. Then we had a lovely spinnaker run over to Middle Percy Island and a lovely but rolly anchorage at West Bay. Next day and another sweet spinnaker run to Digby Island for another nice night and a meet up with friends from last year, Dave and Jan on their Slocum 43, Baraka. Next day and the nicest sail yet this year, a 45 mile port tack spinnaker run  in 15-20 knots of warm breeze, brought us into Mackay where we sit at this moment in a lovely new marina with all the comforts. Dean flew out for home yesterday. It was great have him aboard. We'll be here another couple days re-provisioning and we'll be off to the north again. 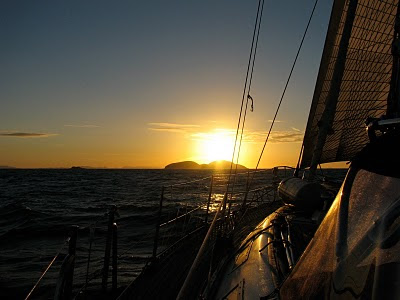 What we're finding so far is pretty much what we anticipated. The SE trades blow across the Coral Sea very consistently and since we're inside the Great Barrier Reef the swell is greatly reduced. Sailing conditions are wonderful. There are hundreds of islands and anchorages as we head north and we plan to do mostly day sails until we get through the Torres Straights and head west for Darwin. We'll spend a few weeks in the Whitsunday Islands and then the only towns of interest will be Townsville, Cairns, Cook Town and maybe Thursday Island. But there will be many island anchorages. It'll get warmer as we head north and the diving should get pretty good. The islands, even down here, are very quiet and almost deserted. The beaches are the best I've ever seen.  We're learning the language. For instance Mackay is pronounced 'MaKai'. Cairns is 'Cans'. And a draft beer is  either a  'schooner' or a 'pot'. 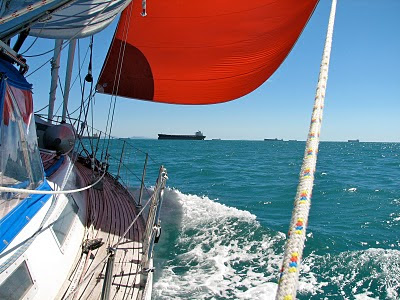 The boats heading for Darwin are beginning to congregate. As we get north it should just be better.

Love to all,
Bill & Janet
SV Airstream
Posted by Bill and Janet Wickman at 9:02 PM

Enjoy Mackay. We were there for a month last June. Unless Thursday Island holds some special interest to you, you might want to consider taking Albany Pass over Cape York instead. Albany Pass was a highlight of the Pacific to us. Can overnight in Escape River; hit Albany Pass on beginning of rising tide and you will fly through the pass. Go around to Possession Island to overnight either in Simpson Bay or on WSW small bay on Possession Island (depending on weather); then next day again ride the beginning rising tide for great current through the Endeavor Strait. Much better than going through Torres Strait. Have fun!!

I'm so glad you finally got moving!! Have a great time and be safe - as always I'll look forward to Janet's pictures.

How thrilling to be underway once again. We'll enjoy following along with your blog.

Great to hear that things are finally coming together! Be safe and keep the posts and photo's coming! Thinking of you often....Laurel and Corky

Have a cold one for us and we'll do the same for you! Your view of the sunset will be much better though, we KNOW! Take care, be safe and remember when sailing... when it doubt, let the sails out.
Tiffany and Jim
s/v Blue Plains Drifter