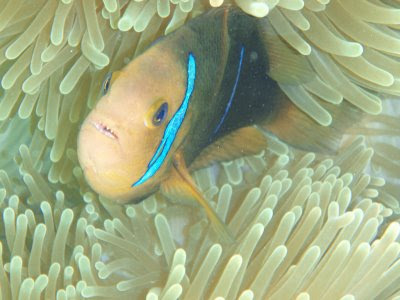 Anemone fishes (subfamily Amphiprioniae) (Dusky Anenome Fish, Amphiprion melanopus to size 12 cm) live in close association with one or more of ten host species of sea anemones. They are protected from the anemones stinging cells by their mucus which carries the anemones chemical signature. This inhibits the stinging cells from firing and is acquired by the larva during settlement at the anemones base. Anemone fishes are protandrous hermaphrodites, that is all mature as males, then some may reverse sex later. Not unlike some humans. The female is the largest most dominant fish of each colony, and her presence inhibits the sex reversion of the males. It has been proven that these fish will attack human females. Especially pesky, nosy, aggressive types who go around sticking their fingers into the host anemone to "see what it feels like". The bite has been described as a "vicious attack, shocking". However, it does not break the skin and serves only to panic the victim into spitting out her regulator at a depth of ten meters, hmmmm.... Anemone fishes feed primarily on zooplankton and filamentous algea and are among the hardiest and most popular of aquarium fishes. 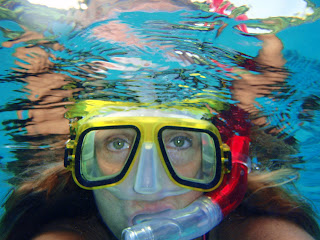 Soooo...obviously Janet is here and the fun has begun. Her flights went very well and she arrived in only a mild state of shock and seems to be settling in nicely. We've started doing some diving and have an almost daily snorkel around the local reefs. The weather has been the tropical mix of sunny trade wind days and occasional rain. The diving is very good with great coral and a nice mix of fish species.

Many of our cruising friends from last year are in the area and it has become very social for now. Two days ago our friends on Meridian and Tin soldier left Opua for Fiji and we're told almost twenty boats are enroute. Soon the fleet will spread out again. We had ten people on the boat last night for sundowners including Steve and Wendy Bott and their son Alan. Their boat, Elusive, sunk at sea on the voyage up from NZ and they were taken on board by friends near enough to reach them before they had to abandon ship. They arrived a few days ago and have been reordering their lives. You can read about the Elusive sinking in the most recent "Lectronic Latitude" from Latitude 38. This has been quite a shock to the group. The Latitude 38 article says all that is known and the rumors running around that they had identified the keel bolts as the problem are definitely not true. They don't know what caused the boat to start taking on water and probably never will. And these are experienced and skilled people.

So we're hanging out in a pretty nice place until our family (my niece Julie and her husband Russ) show up on the 4th and then we'll be off to prowl around the Mamanucas and maybe as far north as the Southern Yasawa Group. Life is pretty good. 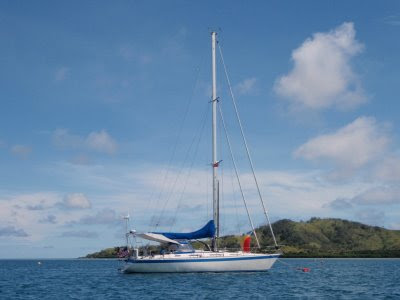 Love to all,
Bill & Janet
SV Airstream
Posted by Bill and Janet Wickman at 8:53 PM