Hello to all, apologies for not communicating quicker,

It's Monday the 13th Fiji date and this is the last day of the Fijian four day Easter holiday. We're on a nice mooring at Musket Cove where all the amenities are available including, just very recently, wifi in the mooring field. 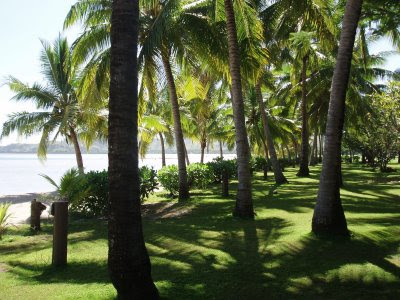 Several friends have expressed interest in the voyage up from NZ since we were one of the first boats going north this season. We were told by customs we were the 14th boat to check in this season (from anywhere) and the second in Lautoka. There are five boats now in Musket Cove. Two long timers, then 'Swan', ourselves and, yesterday afternoon, Alpheratz arrived.

I wouldn't have departed on this passage as we did with just Janet and me aboard. The forecast from Commanders and the gribs from metvuw and sailmail all showed a very rough ride on a beam reach with 15-18 ft seas on the beam in 35-40 knots of wind in the central portion of the rumb line course. So that idea was out the question as far as I was concerned. By falling off a little to the west things were forecast to moderate somewhat. 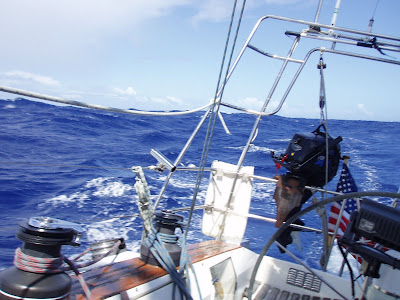 We could have also waited a couple days and had a more comfortable initial portion of the passage but then the forecast later on looked iffy. My guys were spring loaded to go. One has considerable blue water experience and the others are great lakes sailors. It didn't look actually dangerous, just uncomfortable, so we went. And that's pretty much what proved to be the case. We headed due north from Opua and had 25-30 knots on the beam with seas up to fifteen feet for the first three days. Everybody was pretty beat up and a couple guys who claimed never to have been sick, were. We spent that portion of the trip with a double reefed main and the stays'l set on a beam reach. After day three things moderated considerably and we had three days of increasingly lovely sailing, really very nice. The last day we had very light air and some heavy rain. I was hoping for a six day passage but the light air at the end and one day of adverse current in the middle of the course caused it to be seven days and two hours from setting sail in the Bay of Islands to the entrance to Navula Passage in Fiji. A quick and, ultimately, very enjoyable trip with some old friends. It has all been a great pleasure. 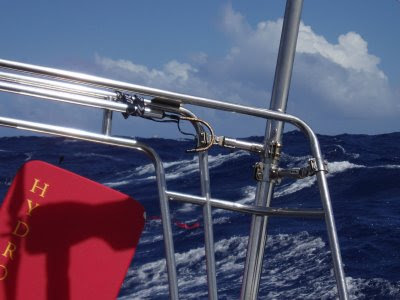 As far as trip planning for coming up from NZ goes I would say the gribs proved to be pretty accurate and Commanders Wx was fairly accurate but they were also pessimistic in their general assessment and suggested a routing quite a ways further west than the course we actually took. They seemed pretty sure we would get 40 knots of wind enroute and we only saw 30 a few times. They were forecasting 15-18 foot seas and we had maybe 15 during the worst. We used the Pacific Seafarers Net for HAM check in throughout the trip and they were very professional as always. We had really excellent propagation for sailmail mostly using the Australian Firefly station on 8442 during nights. Things were a little slower but still usable on the higher frequencies during the day. We caught some very nice Mahi after it calmed down and we could fish comfortably. 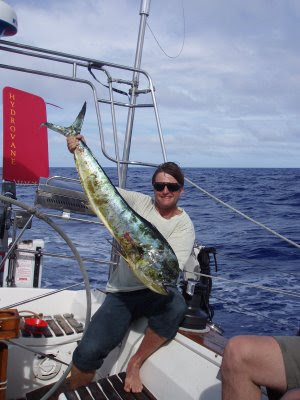 Everything held together and we had no problems except that the clew in the second reef in the main wants to chafe through reefing lines. We didn't actually let that happen but it's eating it's way through some heavy anti-chafe gear and I haven't yet figured out why. The hydro-vane performed beautifully through the trip. The new bearings work very well for this boat. 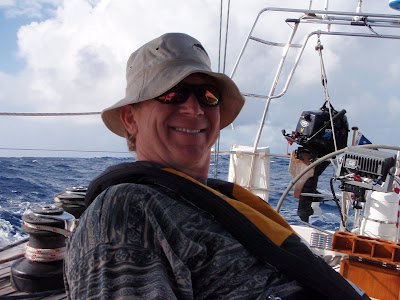 There is one significant and potentially dangerous omission on our c-map charts. The paper charts and Pub.126, Sailing Directions (enroute) Pacific islands, Seventh Editions. Sec.par 5.2, shows Ceva-i-Ra Reef, called Conway Reef until 1976, at 21.44S, 174.38E. This spot could ruin your whole day if you were falling off to the west of the rumb line between Opua and Fiji AND I CAN'T FIND IT ON ANY SCALE OF MY C-MAP CHARTS. This is the first time I've encountered this and it' s not very reassuring.

Check in at Lautoka went very well but we were very lucky because it was Easter and we might have had to wait for days. Poor planning on my part but a good outcome. Customs etc, were all very nice and considerate but it took a couple hours. 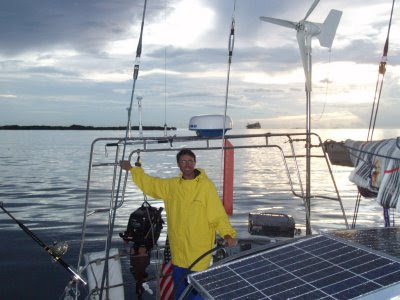 You anchor off the wharf in Lautoka and go pick up customs, etc, in your dinghy to come to your boat. In our case they never even chose to come to the boat. It has been mentioned that a rally is leaving Opua on May 2nd that will have customs check in arranged in Musket Cove. I'd recommend jumping on that if it works into your plans. It's at least three hours from Navula Passage up to Lautoka and there's no reason to go up there other than to check in. The town of Lautoka is a typical tropical third world city. The people are very nice but it's crowded and bustling and dusty. There are interesting markets and the Indian culture adds another element to the scene but you can get that by using other forms of transport rather than traveling at six knots in your boat.

The Navula passage entrance is wide and straight forward but poorly marked. The range is hard to see on the distant shore. Navigation inside is easy enough but many marks are missing or different than charted. Despite what I'd heard our C-Map gps charts seem to be very accurate. But I wouldn't go mucking around in the dark here and I'd I make doubly sure I knew where I really was, this area can be misleading.

Musket Cove is very, very nice. About everything a cruiser wants is here yet it's still quiet and laid back this time of year, From what I've heard, even at the peak it's not nearly as busy as Neiafu. We've just begun to scratch the surface but It's been a very good beginning. I'm also very impressed by what I've seen of the Fijian people. They are quiet and nice but a little more outgoing than the Tongans and seem a little more at ease and confident with strangers. And definitely more efficient. The Indian influence, I believe, is a positive factor and adds a nice mix. 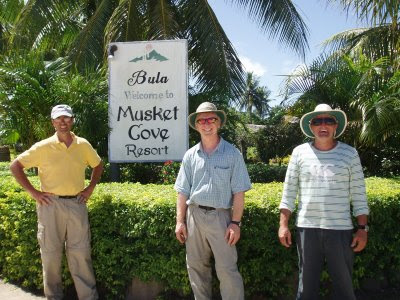 So my buddies are leaving over the next couple days and Janet will be here around the first of May. We'll plan on being here until sometime in July. By 'here' I mean Fiji and probably western Fiji and we look forward to seeing everyone we enjoyed being with so much last season. We hope to see you all very soon.

Love to all,
Bill & Janet and crew, Booth Devitt, Bill Norton and Dan Strehlow
Posted by Bill and Janet Wickman at 8:54 PM