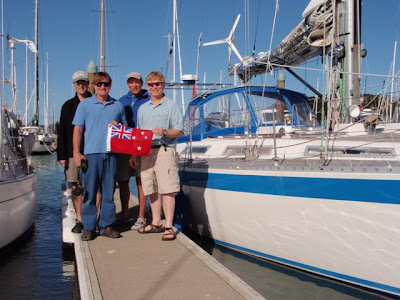 As background, Janet had shoulder surgery on late January and didn't yet feel up to the voyage to Fiji. I rounded up some NWA pilot friends. Dan Strehlow was able to come soon enough to do the trip from Auckand to Opua and then Booth Devitt and Bill Norton showed in Opua and we all did the Voyage to Fiji. Janet should be here around the 1st of May. Let the story begin!

As this is being written it's just after noon on the boat (Fiji time) and we're about 500 nautical miles north of New Zealand three days en route. Everybody has gotten over the sea sickness although I still don't see much reading being done and there hasn't been a hot meal cooked since we departed. Conditions are still a little rough but seem to moderating a little as forecast. At present we're in the middle of an area which was supposed to be 25-35 knot winds with gusts over 40 and 15-18 foot seas. In reality it's more like 10-12 foot seas and mostly 20-25 knot winds. Much nicer. 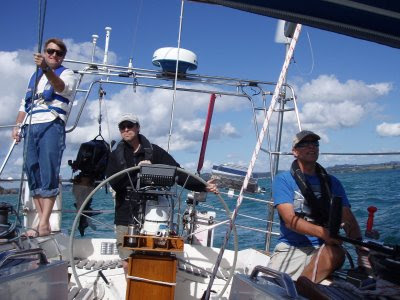 It's been a beam reach since departure and seas on or just aft the beam so it's been rolly and rough but generally sunny and getting warmer as we make progress north. We've had some beautiful clear nights. Spectacular stars. Everybody seems to be having a good time. The trip is basically a week long BS session with four guys who have flown all their lives for a living, most of it for the same company, who have been friends since university, who are all FFDOs(armed pilots)hunters, fishermen, outdoors men, sailors, etc, etc. There's enough variety of individual experience to keep things interesting but we generally have a great deal in common to fool each other with. There is no mercy here. Some one leaning over the rail puking will only getting urging on for more volume, greater range and better vocals. 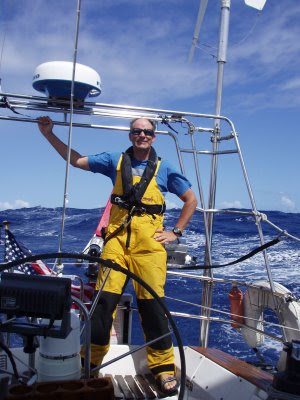 The boat has been behaving itself with no problems developing yet (nice boat!!)and life is good. With a little luck the winds and seas will swing around a little more to the south over the next 24 hours and we'll head a little further to the east directly for Fiji. We have been heading pretty much true north for a better sailing angle. I believe we should get into Fiji Friday the 10th (on this side of the date line) but depending on the hour we may or may not choose to do the reef passages. We want good visual conditions. So we may not get checked in at Lautoka until Saturday, we'll see.

So, to summarize, so far it's been a rough but fast ride in a very congenial atmosphere. We're hoping for a little smoother conditions soon where we can go even faster and also catch some fish. I've just threatened the crew with popcorn for dinner and gotten a tepid response. For now it's peanut butter sandwiches and chocolate bars.

Love to all,
Bill
Posted by Bill and Janet Wickman at 8:24 PM