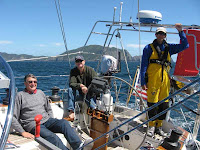 "Big ol' jet airliner.." it will soon be carrying us back home, with a little non-rev luck, come tomorrow night. Leave NZL the 9th, get home the 9th. We get our day back. I hope to sleep all the way to LAX. Something about hearing a big ol' high-bypass fan jet engine growling on start up always has made me sleepy. As my fellow crew members will attest. As of yesterday there were still 138 seats available on NZ FLT 2 so we should get on. Horizon 2304 up to ACV only has 6 left so wish us luck.
Today we're comfortably holed up in the boat on the hard stand at Half Moon Bay Marina, Auckland. The marina is a very friendly and efficient place with a little shopping center, a few restaurants, the usual boating service industry and a nice yacht club nearby. We'll hit the club for dinner in a couple hours. It's been rainy and blowing like stink in the 'northland' (the Kiwi name for this region of NZL ) the past few days but today is sunny and just a little windy, a definite improvement. For us tropically acclimated types it's been down right cold and todays' sun feels really good. Getting back to Humboldt County in the fall is going to take some getting used to.
To catch up, we spent about a week in Opua exploring around and doing boat jobs. Richard and Charles Wallis joined us for the sail down the coast. Richard is the Kiwi-now-American son of Charles and Ann who have a beautiful home on Waiheke Island in the Hauraki Gulf near Auckland. He's a pilot for UAL and his wife, Nathalie, is a flight attendant for UAL. They've been our good friends for many years and their parents have been kind enough to put up with us on previous visits. We took three days to day sail down the coast in nice conditions. Kind of like a protracted San Francisco Bay sail in 15-25 knts from beam to close reaching. We had lovely anchorages in Smugglers Bay near Whangeria, Kawa Island and then Onetangi Bay just below Charles and Ann's home. 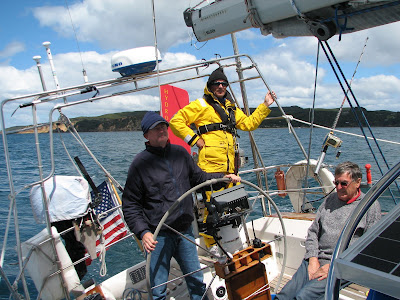 We spent several days with the Wallis family. Janet got to drool over William, Richard and Nathalie's sweet baby boy. And then we moved the boat into Viaduct Harbor right in the heart of Auckland. The marina is in the middle of the America's Cup village and, for a yachtie, it's a rather special place. For anyone else it's just a very cool area with lots of good restaurants and watering holes. We got a room for a night at the Hilton on Princess Wharf as a little present to ourselves and to watch election returns. The big excitement? Bathtub! Long, deep, granite tiled and unlimited hot water! We hadn't had a bath since before we left back April 5th. What luxury.

Three days in Auckland. It's a decent city and the water front area is very nice and very sailing oriented. However, three days in just about any city is enough for me and Janet is almost as anti-social. So we weren't sad to head over to Half Moon Bay which is a few miles east of the metropolis. The boat will be stored out of the water here until we come back, probably in March, and get ready to head back out again. 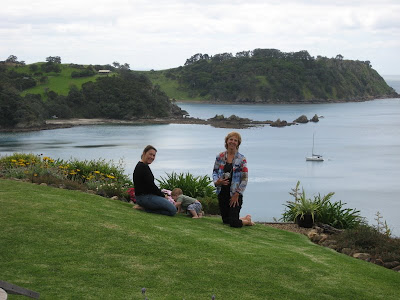 So the trip here is completed. Hmmmm...how do it feel? It feels good, definitely, but why? Good question grasshopper but I'm not sure I have the answer yet. There's the obvious, we put 8283 nautical miles under the boat since departure and survived without major damage to the boat or ourselves or 'us'. There is some satisfaction in that and I have the feeling it may be one of those experiences which takes awhile to sink in, that it has to age in the barrel a few months at least. We visited some wonderful places which really can't be done very well any other way than from a boat. We met some sweet people in those wonderful places and had some cultural experiences we will not forget. Perhaps more than any one other thing we enjoyed the camaraderie with our fellow voyagers. There are great folks out doing this thing and to be with them is a privilege. It's a band of brothers (and sisters) type thing and if you're out here you're a part of the brotherhood until proven otherwise...and it's a very broad minded community. 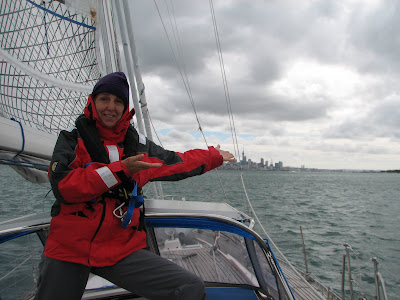 So, I'm told I need to provide some specific examples.

Wonderful places. I'll say Toau, just as an example. A classic South Pacific atoll. We had miles of beaches to ourselves in the south and a wonderful time with Valentine and Gaston up at the northern inlet.

Wonderful people. Valentine and Gaston at Toau. Faaki, the woman who proudly showed us around her village of Matamaka in the Vava'u group, Tonga. Irony...her husband had to learn to be a fisherman after the company he worked for as an aircraft fueler, Royal Tonga Airlines, went broke a few years ago. Some things are the same everywhere. Lisa, Ben and Jason at the Aquarium Cafe in Neiafu, expatriate Americans working very hard, having big fun. Lawrence at the Bounty Bar, the quintessential English gentlemen.

Cultural experiences. The singing at church in Rarotonga. The finest religious singing I have ever heard, rhythmic, complex and deeply moving. Even the stern, tough old minister of the church was blinking away his tears standing at the pulpit while that congregation sang. Seemed he hadn't quite hardened to it after fifty years. The Heiva festival in Huahine, wonderful dancing and a glimpse of Polynesia for Polynesians. The Polynesian drum bands, especially during the competitions in Bora Bora. A Caribbean steel drum band can't compare.

The theory that life is a journey has probably been around since mankind started thinking much beyond the next meal. If nothing else this trip was a powerful reinforcement of that idea. The destination doesn't really matter very much. The journey and how you 'travel' is the important thing. 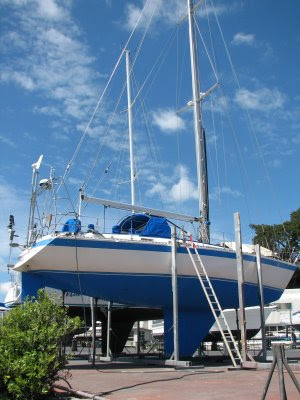 Posted by Bill and Janet Wickman at 1:44 PM

Looks good Bill.
I think this is the best way to communicate your travels.
Give a call when you know your travel plans to ANC.
If you need a place to stay, let us know.
Loren