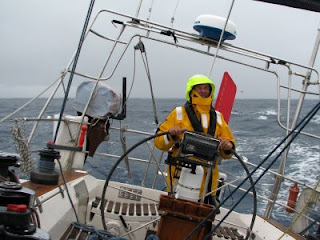 We're in Opua, New Zealand at their lovely marina and effective email contact has been established, I think. And not without effort. But we have some sort of lift off now. My apologies for the lack of communications lately but things have been pretty basic.

We had a good voyage on a passage which inspires a certain dread in the cruising community. There have been enough horror stories generated from the Tonga to NZL trips over the years that everybody takes it pretty seriously. Nothing wrong with that but several hundred boats a year successfully complete the journey. It can be done.

We left Nuku'alofa, Tonga on the morning of the 10th. It was a lovely day with little wind and we motored as planned until late afternoon when the wind began to fill. By the next morning we had 20-25 knots on the nose and had fallen off to the SW making good time in rough conditions. Since we were going to pass close to Minerva Reef we decided to go in there for a quiet evening. That worked out well and we had a nice anchorage in the middle of the Pacific without another boat anywhere around. We had a NZL navy P-3 fly over who confirmed both north and south Minerva reefs were empty except for ourselves. We left Minerva on the 13th and continued to swing a little west before heading almost due south for NZL. Conditions moderated and we had several days of good sailing but it was getting progressively cooler. Say goodbye to the tropics. About 36 hours out we got a big header and it was either motor directly into 20-25 knts and seas or beat into it sailing. Since we ARE a sailboat we just did the sailing and made as good a VMG as we would have motoring. Again conditions moderated and we ended up motoring in glassy calm conditions the last fifty miles into Opua. Quite nice actually, if we had to motor. We made landfall at 1656 local time with 38.6NM left to go to the entrance to the Bay of Oslands where Opua is located. 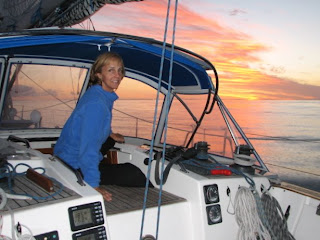 There was an especially lovely sunset with the coast of NZL rising. We were tied to the quarantine dock in Opua at 0105 local time. So Nuku'alofa to Opua took 9 days 16hrs 10 minutes. We stopped in Minerva reef for 17hrs 45 minutes. Total time enroute was 8days 22hrs 25minutes. Distance sailed (or motored) was 1355 NM for a straight line course of 1032 NM. Average speed was 6.3 knots for an average daily distance of 151 NM. So that completes the majority of this years sail. We'll leave here in a few days and take our time day sailing down the coast to Auckland and we may have NZL friends on board for that. Then we'll put the boat on the hard at Half Moon Bay Marina in Auckland and the plan is to fly home on the 9th of November.

I got a ride as crew on a Titan 7.7 last night for the Wednesday evening beer can races. The boat looks just like a Melges 24 on steroids and is the faster thing I've ever sailed. There were about forty boats out there for a nice race and we were either second or first depending on how the times corrected out. There was one big skiff with racks and five guys on trapeze who finished ahead of us but that sail was the fastest I've ever gone in a sailboat. These guys are local pros, a rigger , a sailmaker, etc. They let me trim the main down wind and be rail meat upwind and it was very educational, and great fun! 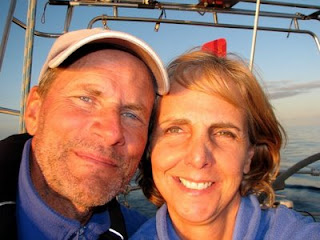 I'm just not ready to summarize this trip. Too many thoughts about too many things. It's been a great experience. We've learned a lot but I think the more I see out here the more I understand there's much more to know and never enough time to learn it all.

Love to all,
Bill & Janet
Posted by Bill and Janet Wickman at 11:34 AM