Belitung and a Change in Plans

The bash to Belitung finally ended, as all bashes do, and we anchored at the initial Indonesia Cruising Rally anchorage we used two years ago. The hook was down at about 0100 on the 14th. We were very, very tired puppies. Since then, after getting some decent sleep, we've had a great time. Part of  that was due to socializing with Tom and Suzie from S/V Priscilla and a lot of it was due to Harun Cahyadi, an Indonesian businessman here in Belitung who is a great guy.
We had been put in touch with Mr. Cahyadi by other cruising friends who had met him and made use of his services as a customs agent in Belitung.  The morning after arrival we moved over to anchor near Priscilla off Harun's beach about a mile east of the rally anchorage and got caught up with Tom and Suzie. 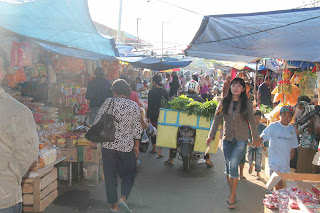 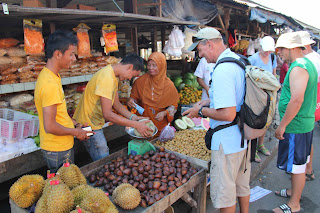 We all then went ashore to meet Harun and get started with the port documents. To consider Harun as just a customs/port agent would be a big mistake. He and his family are Chinese business people who have been here  three generations and own a sand and gravel mining business, hardware stores, machine shops, barges, tug boats, an oxygen supply business and a lot of land with some of the most beautiful  beaches you will find anywhere. They're interested in developing the tourist industry in Belitung and yacht services are included in that interest. This man speaks excellent English (as well as Bahasa Indonesian, German and three Chinese dialects), was educated in Germany and beyond all that is just a very nice and friendly guy who wants to be of help and wants to learn what yachties desire in the way of services. He also proved to be a very efficient agent. 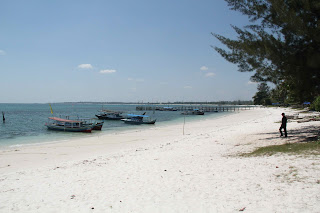 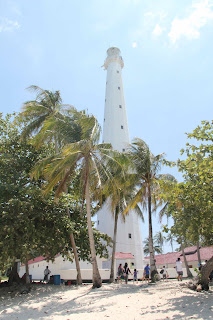 So Tom, Suzie and us spent most of our time ashore with Harun and his family. We went to markets and restaurants and bakeries (oh yes, they own the main bakery in town) and we hung around their beautiful pool with the family. Today we went out to the big lighthouse offshore of the NW corner of the island by boat with his friends and family and climbed the 230 foot steel light house built in 1882 and still in use. We've had a great time with them and it has been one of the cultural highlights of this entire voyage. Any yacht traveling to Belitung, one of our favorite places, should  deal with Harun Cahyadi for any services they might require.

So we've been in Belitung four nights and tomorrow morning we head back north to Nongsa Point Marina. The SE trades have been blowing unabated and we anticipate a nice sail up as opposed to the nasty motor trip down. The big change is that we are not going to do the Indian Ocean passage, not this year at least. Janet is very unhappy about the idea and I don't want to her to do a trip she's so dreading. We've adopted plan "B", again.
Since we didn't do the Myanmar trip we'd planned earlier in the voyage due to visa hang ups we're going to do it later this month after we get settled back in at Nongsa Point. We now have our visas and we'll see that Scott gets one and, probably about the 30th, we'll fly from Singapore up to Rangoon (now Yangoon) in Burma (now Myanmar) and spend about a week traveling around. Yachtie friends who's judgment we trust have raved about their trips to Burma so we can't resist one more chance to go.
After that the questions are open. Yes, we go home, but where do we decide to leave the boat? When do we intend to come back? Where will we go next, etc, etc??? I have no answers to those questions yet but I will say we've always enjoyed Rebak in Langkawi, Malaysia and it would not be hard to go back.

Thanks for following the blog. We'll upload photos from all these events from Nongsa Point when we get there.

Love to all,
Bill, Janet  and Scott
S/V Airstream
Posted by Bill and Janet Wickman at 6:43 AM

Sorry to hear your change of plans. A couple of other westward bound boats we know turned around in 2011 and returned to SE Asia. Both of them are now in Cocos Keeling. Both had very enjoyable passages there from Indonesia about 5 weeks ago. Hope you enjoy touring Myanmar and good luck with future decision as to where to go next.