Ahh....Civilization, at Home and Abroad

So I'll get it off my chest right away and then go positive. Never fly Air Asia. Air Asia being the "low cost" carrier based out of Kuala Lumpur and serving much of SE Asia. I've flown them too much in the last couple years and I can guarantee that no one makes you feel "low cost" like Air Asia. That stuff I said about airlines that look good on the outside having a decent chance of being good inside the operation applies both ways. The zoo that is the "Low Cost Carrier Terminal" at KL is a mostly Air Asia creation. They've squeezed their last dollar out of me, I'll never fly them again if I have a choice, and I'd recommend that you pay a little more and fly someone else.
Now for the positive stuff. The bus ride from Saigon to Phnom Penh was pretty decent. It took about five hours in a comfortable, air conditioned bus with one stop for lunch and an efficient border crossing into Cambodia.  Interesting that there was no 'entertainment' on board until crossing the border from Viet Nam. Then, the bus crew, a Vietnamese driver and 'door gunner', immediately put on a shoot 'em up war movie where the good guys were Cambodian Hmong types and  the very despicable bad guys were the Vietnamese army.
No English but no translation necessary, hmm....Anyway, it was an interesting trip through very flat, mostly flooded, rice growing country. The city of Phnom Penh sprawls along the Mekong, a dusty, vibrant and rambunctious third world Asian city.
Only as you reach the heart of downtown does it begin to seem at all modern. Our hotel, "Hotel 9",  was very comfortable in a good location and we ate well nearby at a nice Cambodian/French restaurant, the "Boat Noodle".
We tuk tuk'd around the city. But the highlight of the  stay was lunch at the Foreign Correspondents Club, the "FCC",  bar and restaurant. It's a second and third floor open air affair looking out directly onto the street and over the Mekong with a great atmosphere and pretty good fare best described as "western nomadic". You really need  to have a meal and a couple drinks at the FCC if you're in Phnom Penh.
Much of the tourist stuff  revolves around the Khmer Rouge atrocities. Who was it said, "....the banality of evil" ? These people didn't have or need much imagination. They just took anyone they didn't like out and beat them to death with a piece of rebar, etc.  But they were  sure to take their photos and carefully record their names before hand. I don't think Mao and Ho were as  bureaucratic.
It's pretty amazing, considering what happened, and that recovery really only started around 1998 after the Vietnamese left, that Cambodia has come so far so fast. The Cambodian people we met were very sweet.  By the time we left Siem Reap I had developed quite a liking for the Cambodians. They have a lot of energy and desire and pride in their history and they want to do things well. The tuk tuk drivers, our guides and hotel staff  in Phnom Penh and Siem Reap were  good crew.

We took the ferry up the river from Phnom  Penh to Siem Reap. The 'river' is the Tonle Basak but it intertwines with the Mekong several times between Phnom Penh and the South China Sea. So where it's no longer the Mekong I haven't figured out. I believe it's safe to say that upstream of Phnom Penh it's no longer the Mekong and it runs about 150 km up from Phnom Penh to the Tonle Sap, the Cambodian great lake. Our boat went up that river to the lake  and the 100 km or so to the NW end of the lake where the port village serving Siem Reap is the end of the passage. The boat ride was great fun.
The ferry boat itself is about one hundred and twenty feet long with maybe a fifteen foot beam. It's almost fully enclosed, very low free board, with a rakish bow, air conditioned, fairly quiet and smooth. There's a big twelve cylinder dual turbocharged Yanmar diesel powering a single prop and the beast "flat hauls out". We did the 250 km in about five hours! Most of the trip some of us were out on the bow watching the river  scene and since there was too much speed generated wind to keep a hat on we got fried by the sun. It was worth it. Once we were clear of the Phnom Penh city area the river was a step back into a seemingly timeless rural past. 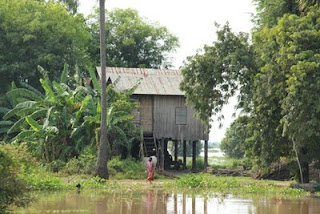 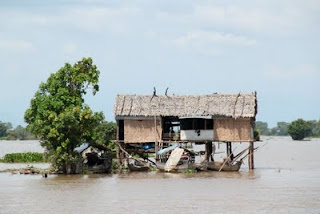 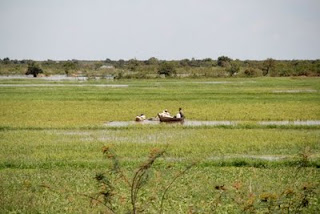 People live on or along the river fishing and growing rice. There is almost no sign of modern life. There was an occasional Wat along the banks and surprisingly few villages. The passage of the ferry was big excitement and naked kids would be waving from along shore. Water buffalo are the chief farm implement. Homes are wood or bamboo and grass and everything is on stilts. This was high water but we were told it would continue to rise for about another month. 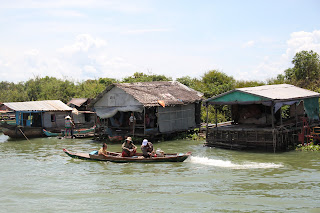 A tuk tuk ride got us into Siem Reap from the ferry. At this point I should say that the Cambodian version of the tuk tuk varies from any we've seen elsewhere. They use an entire motor cycle as a 'tractor'.  The cab is attached to the seat of the motorcycle by a 'fifth wheel' type arrangement like towing a trailer. We passengers sit in the trailer  while the intrepid tuk tuk commander, who always wears a helmet while under way in Cambodia, braves bus devouring pot holes, blinding dust, pouring rain, insane traffic and wandering cattle. And we in back have no fear, heh, heh.  A tuk tuk ride all over Phnom Penh or Siem Reap costs about two dollars US.
Which brings up another little bit of craziness. Almost everywhere in Cambodia the US dollar is the currency of the realm. The 'official' Cambodian currency is the 'Riel' at about 4000 to the dollar. But guess what, the ATM machines give only US dollars! And everywhere we went, from street kids hustling whatever to restaurants to hotels to the temples at Angkor,  the dollar is the standard currency. You can use riels if you have them and you'll get them back from your dollars as small change, that's about all.
In Siem Reap we stayed at the Kool Hotel which is one of the really greatest  small hotels we've ever enjoyed. The public areas and rooms are lovely in tile and hardwood. The rooms are large and spacious with all amenities. The pool is nice and  the staff were absolutely the best. At one hundred sixty eight bucks all inclusive for four nights this was a bargain.
Siem Reap is interesting enough in itself. The town bustles with tourist activity and the streets are lined with hotels, restaurants, watering holes and massage parlors. The name means "Siam Defeated" and the town was founded after the Cambodians defeated a Siamese (Thai) invasion back around the 12th century. These days the reason for Siem Reap being anything but a rural Cambodian village are the temples at Angkor, Angkor Wat, as known to the world.
So, like everybody else, I'll use "Angkor Wat"  as a name for the whole temple complex area even though 'the' Angkor Wat itself is only one of many temples in the immediate area. It is the largest single temple and the best preserved. The claim is that it's the largest religious complex in the world.
Trying to describe Angkor Wat and everything to be found there is well beyond the scope of this blog. I can only say  the place is well worth a long journey. The temples and peripheral structures, moats , walls,  stone carvings, etc,  are magnificent.

Initially we were put off by the tourist hoards at one well known  sunset viewing hilltop temple. But after that we found the area not over crowded and we  both were very happy with the visit . We spent two days with hired guides who were very good and I would highly recommend that plan. We got far, far more out of our time than we would have on our own or with a larger group. We also had a taxi to drive us around and given either broiling sun or heavy rain it was a good idea. Cabs and guides are not expensive and were worth far more than we paid.
It's one thing to read about the glories of a past civilization and another to be presented with the evidence. On viewing the temples there is no doubt of the power, size and cultural complexity of the population that existed here between about 900 and 1300 AD. Internal political and religious strife created weaknesses that enabled external enemies to destroy the Khmer culture of the time. In no other place I've seen has the experience of a 'civilization lost' seemed so powerful.

We put the boat to bed in Rebak after returning from Siem Reap. As we left it looked a little lonely but secure. We came out of Singapore on Delta to Tokyo, couldn't get on the SFO flight so we took DL 296 to SEA. Caught a United A320 down to SFO and got on the last flight home to Arcata.
Now it's September 2nd and we're home. The weather is beautiful and our place has been very well kept by our house sitter. We're jet lagged and culture shocked as expected.

It's been quite an eventful six months for me. Janet had a good time in the Phang Nga gulf and doing this land cruising. The plan for next year is not yet defined but come February or March I anticipate some long passages. Back to sailing!
Love to all,
Bill & Janet

Posted by Bill and Janet Wickman at 3:50 AM

Welcome Home Wickmans!
You MUST be jet lagged! I see you posted this at 3:40 AM, when only the cats and roosters are awake.
You have arrived for some of the best weather we've had all year!

Great reading. I always eagerly read your posts when they arrive. Thanks for putting them up for our enjoyment.
Great pictures too, which, given the lack of shots with Janet in them, I attribute to her. Good job!

Another interesting blog update - insightful and entertaining, and I always enjoy it when you get onto a rant about something Bill! Pictures, particularly the street scenes, are amazing Janet. Enjoy your return to the Land of Everything

Thanks for another informative and entertaining blog update. I especially liked the Angkor Wat pictures... I can only imagine what it looks like in person! Wow.