I get a real warm fuzzy from counting the millions in currency found in my wallet at any given time. It's great fun watching the ATMs spitting out bills in denominations of 500,000.
Of course it's  Dong, the currency of Viet Nam,  and the exchange rate is roughly 20,000 Dong to the dollar. I am SO confused. Most ATMs will only give you 2,000,000 a hit which is about $100 so the nice warm fuzzy comes fairly often. But Saigon is not an expensive place. We've had some very nice meals very cheaply and street food costs almost nothing. As a city it's hard to think of a comparison place but Manhattan, some areas of Manhattan, come to mind. There  is plenty of energy and it's a very aggressively capitalistic place. There are most major international hotel chains represented in some posh buildings. The real high rise commercial construction is just beginning. There's one nearly finished glass and steel creation which will be interesting when completed. There is every very high end name in fashion and apparel to be found.
In government architecture it seems much more a capitol city than does Hanoi, but  in practice no place could be any less "communist". That historic bad joke was given up on about twenty years ago in Viet Nam although the "party" remains the one  political entity allowed.

We're here for another day and then we take the bus to Phnom Penh for a couple days before taking a boat up the river to Siem Reap and a few days at Angkor Wat. From Siem Reap we'll fly back to Langkawi via Kuala Lumpur. The plan is to put Airsteam to bed and come home on the first of September. We'll leave it in the water at Rebak marina. That's what we did last year and it worked out very well.

This trip began with a couple days visiting old haunts in Bangkok. The Thai 'Baht', about 30 to the dollar. We had a lovely lunch with a friend at the Mandarin Oriental, one of the great hotels in the world.
We stayed at the Novotel Siam Square which was my old layover hotel flying with Northwest. And we took the new SkyTrain to and from the airport which is a vast improvement in speed and comfort from using a taxi on the roads.

Bangkok was fine but we've both been there plenty. Vientiane, the Laotian capitol,  was new territory and Lao Airlines was a new carrier for us. Vientiane is an hour flight and as different from Bangkok as Ensenada is from San Diego. The Laotian 'Kip', about 8000 to the dollar. I was just starting to get confused.
Vientiane is a city of about 300,000 on the north bank of the Mekong but it has a small town atmosphere and is certainly the most laid back national capitol I've ever seen. The Lao people seem exceptionally sweet. There is no high rise construction in the city. Traffic is not heavy and the mopeds and bicycles far outnumber the autos.
The old French influence is very strong in architecture and food. There are very good bakeries and western food as well as the Lao fare which we enjoyed. It's a very inexpensive city. We got a couple of the best massages we've ever had in a nice spa for about $12 for an hour and a half. The site seeing is good for a couple days at least.  I enjoyed Vientiane whereas Janet felt it was just TOO third world.

After a few days in Vientiane Janet couldn't wait for the big city of Hanoi. And Hanoi is a fair sized place at about four million folks. Again we flew Lao Airlines.  Things are definitely different  from Vientiane. It's hard to imagine the Lao folks trying very hard to scam anyone. In Hanoi one of the most well organized and aggressive taxi scams in the world operates on a large scale at the airport. The Vietnamese are out after the Dong, number one!

We had arranged transportation from the airport through our hotel. Even then, as you exit the terminal arrival area the taxi guys will ask what hotel and when you tell them another guy will come up waving a sign from that hotel. The idea is to lure you to another hotel with a similar name far from your intended destination and then either get you to check in there or hit you for a big taxi fare. This was tried on us but our real hotel had our names and an identification code to confirm the ride so we didn't have a problem. Beware taxis in Hanoi. There were about fifty guys hanging around in the arrivals lounge playing this game. The city itself sprawls along the banks of the Red River. There is almost no high rise construction. You may have guessed this is something I like in a  city. It seems a much more naturally human place to me. Big modern sky scrapers are exciting to look at in themselves but I'd rather look at a city of trees and buildings of a more modest scale. Rome, Venice and Washington DC come to mind. Paris would be a far better place without the Tour Montparnasse . Hanoi is probably the most French seeming city I've seen outside France. We stayed in the Old Quarter  in a very nice small hotel. The street we were on was three paces wide and could easily have been mistaken for a back street in Montparnasse. 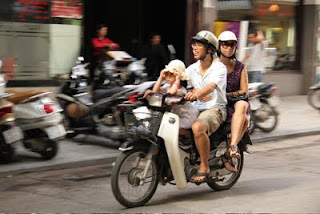 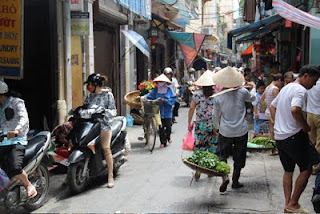 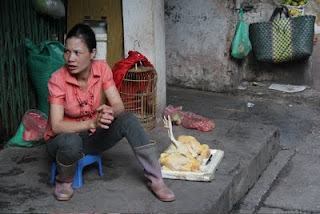 Except that on the narrow curbs people were cooking meals and slaughtering chickens and parking motorbikes chockablock and selling vegetables and cutting hair and basically using the curbs and the street as an outdoor communal living room and business center. We did our site seeing. The Maison Centrale (the "Hanoi Hilton") and some temples and museums.
But Hanoi itself is the main attraction. We had some good meals, western and Vietnamese, and the prices were varied from inexpensive to very, very inexpensive. Getting lost in the old quarter is impossible to avoid even when you're trying and it's a pleasure unless you're in a hurry. There's little reason to hurry in Hanoi.

From Hanoi is was another new-to-us carrier, Viet Nam Airlines, to Hue and then to Saigon. I will say that both Lao Airlines and Viet Nam Airlines were completely professional and we had no complaints of any kind. Lao flies ATR 72 aircraft, I don't believe they have any jets, but the aircraft were clean inside and out, they left and arrived on time or early  and everyone seemed very well trained, happy enough and professional. I think an airline which manages to look good from the outside is usually, not always,  acceptably good inside the operation as well. I could say the same for Viet Nam Airlines except that they are much larger and international. We flew Airbus A321 aircraft from Hanoi to Hue and Hue to Saigon and had good flights.
Hue is another relatively small Asian city, about 300,000 people, and it seems smaller. The city is built along the banks of the Perfume River. The French influence is very pronounced in architecture and atmosphere but this is the old capitol city of imperial Viet Nam.
The tombs and dwelling places of the emperors are the primary tourist attractions and since many of the best of them are near the river, a river tour is the thing to do when in Hue. We had a fun day with the two of us on a boat doing the sites. The tombs and palaces at Tu Duc are perhaps the loveliest we've seen anywhere in Asia. 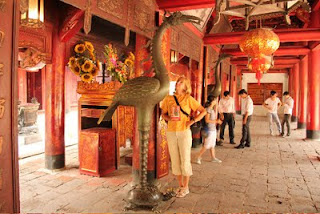 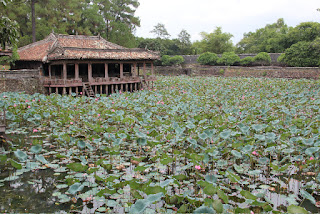 The  guy and his wife who owned, operated and lived aboard the boat were fun and she cooked us a great lunch on board. 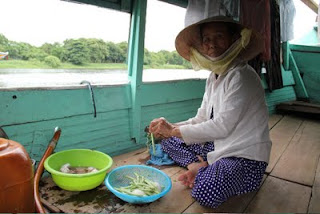 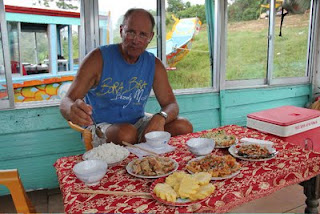 The other main attraction in Hue is the massive, rather grim old Citadel. There is big big flag on top of the tower but there once was a better one. I had to go wander around the southern walls while Janet was sightseeing in the very nice Imperial Enclosure. For me, the Citadel evokes a lot of old memories.
We  really enjoyed Hue and I think Hanoi and Hue are well worth a visit if you're in this part of the world. Saigon, well the verdict is still out here. Not that it isn't an interesting city now but as of yet I'm not sure it's worth the hassle of getting here.
There are a lot of interesting cities in the world and so far the new  Saigon, other than a really outstanding Vietnamese dinner we had last night, hasn't shown me much of special appeal. There is some nice architecture remaining. There is plenty of really good food. The 'sites' are not much. The 'War Remnants' museum is almost funny in a sad sort of way.
If nothing else  these cities make it clear to those of us who were young and in the military during the Viet Nam war that the war was forty years ago. There's almost nothing outside the museums remaining in Viet Nam from the war. Most Vietnamese and most Americans were not alive during the war. The world has moved on. This is as it should be.

So we're outta here day after tomorrow for Phnom Penh. Sorry if this has been a bit of a book but I could go on about much more. Thanks for reading.

Posted by Bill and Janet Wickman at 7:43 PM

Thoughtful posting. Revived memories of our visit to same places last year. You have a better attitude toward the War Remembrance museum than we did.

love your pics. they remind me of my time in vietman a few years back. looks like you are having a fun time touring. miss you both. karli

Great updates! Love the pictures too. I can't wait to get there one of these days. We're still at Vuda. Engine is in....it's been raining alot so Mokisha is patiently waiting for her new paint job. Hopefully Monday then home for us as well.
Colleen & Tom
s/v Mokisha

I just discovered your blog because I am working with Mike Locatell to buy a yacht and he told me to check out your pages. Now I also see that we live in the same town almost. I have lived in Humboldt for 31 years, mostly in Bayside. Now I am intending to buy an offshore sailboat and do something similar to what you are doing. Mike has shown me the Wauquiez Centurion and others. You guys are amazing voyagers and travelers. Your blog is so inspiring. I will keep reading to catch up on your adventure. Thank You, Sam