Its a sunny afternoon. I'm laid back in my favorite chair with a friendly cat curled up beside me. Blue skies and and the view of  a relatively sedate North Pacific out beyond  Clam Beach remind me once again why we live here. Getting away from it all is not the reason we go sailing. 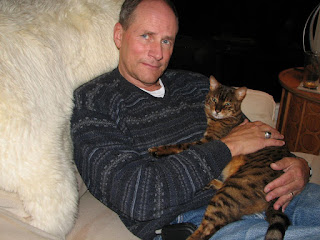 The trip home went exactly as planned. We purchased full fare tickets on Iberia from Las Palmas up to London Heath Row. The four hour flight was OK. It was really Iberia Express which is Iberia's answer to the low cost carrier fad complete with the usual BS to be suffered on these airlines. 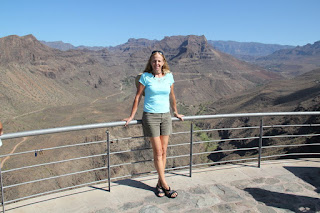 But the trip was on time and we were met by Dennis and Janet Knight who are cruising friends from way back. We spent two nice days at their lovely place in South Hampton seeing a part of the UK new to us and very much a center of sailing activity. The countryside was beautiful, the village pubs quite nice and the local Ferrari dealership definitely my kind of toy land. Thank you to Dennis and Janet! 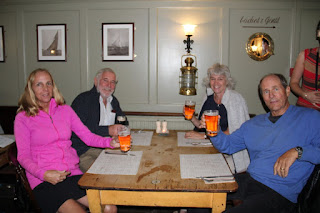 As lowly non-rev type airline retirees we still got nice business class seats on Delta to MSP and then good seats in coach onwards to SFO. Very nice. We rented a car and spent the night at Janet's sister and her husband's very cool home in Mill Valley before driving north the next day. Ahhh, home again, home again, tired but happy.

The boat is on the hard at Pasito Blanco Marina on the south side of Grand Canary Island. The haul out was well done and the situation at Pasito Blanco seems secure and well protected. The marina staff is very nice and eager to please. Of course the Canaries are no longer in the Med but they are part of Spain and in many ways it seems like we're still in the Med.

After three cruising seasons in the Mediterranean its time to look back and offer some opinions on what we found and experienced. And first I must qualify everything by saying we by no means saw it all. We have friends who have spent more than ten years in the Med and haven't seen it all. If we've learned anything in our eight years of cruising its that you can never see it all, anywhere. We saw a nice slice of the Turkish coast, quite a bit of the Aegean,  traveled pretty extensively in Greece and have seen a fair amount of the Ionian Sea. We've come across the southern Med to Malta, Sicily, Sardinia, the Balearic Islands and the Spanish mainland. We've seen about half the Spanish Mediterranean coast and some of the major Spanish cities. The list of what we haven't seen  would be much longer.
First of all we're glad we did the Med. We had always planned to do the Indian Ocean/ Red Sea route into the Mediterranean from SE Asia but the pirate situation in the Gulf of Aden made that less appealing. Ultimately shipping the boat to Marmaris was the right thing for us and we have no regrets about that decision.

For a non-EU boat and crew the Schengen rules are  a background headache. Its a perfect example of the foolishness and futility of mega-scale bureaucratic over regulation. It all came to nothing but it is a bother and could be really painful if one is unlucky enough to attract the regulatory eye.

The big positives: the beauty of the Turkish coast and the Aegean Islands, especially the Dodecanese, the layer upon layer of history to be experienced across the entire region, great food in Greece and Italy, decent and friendly people everywhere, beautiful weather (most of the time),  lovely clear (if rather barren) seas, wonderful art and architecture to be found in many cities, driving around the Sardinian countryside, we loved much of Spain, all in all a wonderful cultural experience.

The negatives: hordes of charter boats who haven't the faintest idea what they're doing out there, the Mediterranean sense of space in an anchorage, over crowding in general by the standards of much of the world, either too much or too little wind and usually in the wrong direction, the expense of many places, the lack of cruiser camaraderie, most of these people are on a short holiday and the friendship bond formed by long term cruisers just isn't a factor.

So we're glad we did it and we'd do it all again. But now its time to move on and the boat is in position to start the Atlantic crossing when we return in January of 2016. Janet has sworn off that roughly three week passage and I'll do it with the same guys who did NZL-Fiji with me several years ago. Should be a great trip. Thanks for reading and please stay tuned. We should be back in action in a few months.

Posted by Bill and Janet Wickman at 5:15 PM

Nice to be home, nice to be gone; each with its place. Your blogs of the Med were great. Made me hit the history books again! Even got a Final Jepopardy question, because of your Lord Byron poem!Happy Trails.
Mike & Liz

Nice summary and glad you got Business Class ! You two have done well in your sailboat adventures for sure. Sue and I leave tonight for Sydney, Australia( for a wedding and more). Keep in touch. charlie & sue

HOME, SWEET HOME. It was very nice summer for you, but also for us that we were looking all these great fotos and reading all what you send us. We will have very good memories!! Have some rest now till the next trip.

Welcome home--and thanks for the vicarious pleasures of your travels. See you at the gym.

Welcome home. I look forward to your blog on "Crossing the Atlantic". Exploring the Caribbean Islands will be great and we look forward to a visit at our house on E Lake, in Miami.