Its a quiet morning in the anchorage at Platerias. There are a few scattered clouds over the mountains surrounding the village and a cool breeze off the deep bay. By this afternoon it will be hot but there will still be the breeze and it will still be quiet and lovely.

Platerias is not to be found in the Lonely Planet guide to Greece. Even though that thing seemingly most desired by Lonely Planet readers, a good beach, is very much in evidence at the head of the bay. There is some tourism here, to the level that some services are better than what might be expected from what was once an old fashioned fishing village, but the place is essentially for yachties and those tourists who can read between the lines and maybe have a map. Sometime in the last twenty years the local peers  decided to invest a bunch of money, probably EU money, in a modern quay and harbor facilities. As a result we are stern tied to a broad, well made and well maintained concrete quay with a rock wall to seaward. The view is lovely. Everything works if you want water or shore power or fuel. And the town is still friendly even in the heart of the "season" when folks are starting to get burned out on "guests" in their towns.
Just a few miles to the west the view is of the island of Corfu, certainly one of the best known tourist destinations in Greece if not the world. We just arrived from there yesterday. The contrast is striking. Corfu is a big island and a comparatively complicated place. We liked it, but we got lucky in my opinion,  and started off in Corfu at the very best of places.
For a yachtie that very best of places in Corfu is Mandraki Harbor just under the northern walls of the Old Fortress in Corfu Town. The massive fortress sits on on high peninsula over the bay and the walls extend directly into the sea at most points. Beneath the north walls is a narrow quay and the harbor is built out from that point. It is not a large place but its run by the Corfu Sailing Club and they have a clear idea of what every yachtie wants.
That includes good shelter for the boat, a world class atmosphere (where else are you tied up against the wall of a Byzantine, then Venetian fortress that has withstood every assault for the last seven hundred years) a great view, fine restaurant, nice little beach, showers, fuel, water and shore power. All for 40 EU a day.
And to exit the club you walk up stone stairways and ramps through multiple massive stone archways into the inner keep of the fortress. From there over the multiple moats and  quadruple walls into the heart of the Old City of Corfu Town itself. And the Old Town portion of the city is charming.

Old Town Corfu seems to be more a miniature, quieter, cleaner Rome than any other city. The Italian influence evident elsewhere in the Ionian is very strong. The architecture of the city is a wonderful mix of French arcades topped by Italianate shuttered facades and tile roofs. Throw in a couple English neoclassical palaces and you have a beautiful city.
There are really good restaurants, especially Italian restaurants. There is great ice cream. We had a Janet's  birthday dinner at 'la Cucina' that was memorably excellent. We had every morning coffees and snacks at a lovely cafe along the esplanade. This was civilization at its best. We give Mandraki Harbor and old town in Corfu an A+. 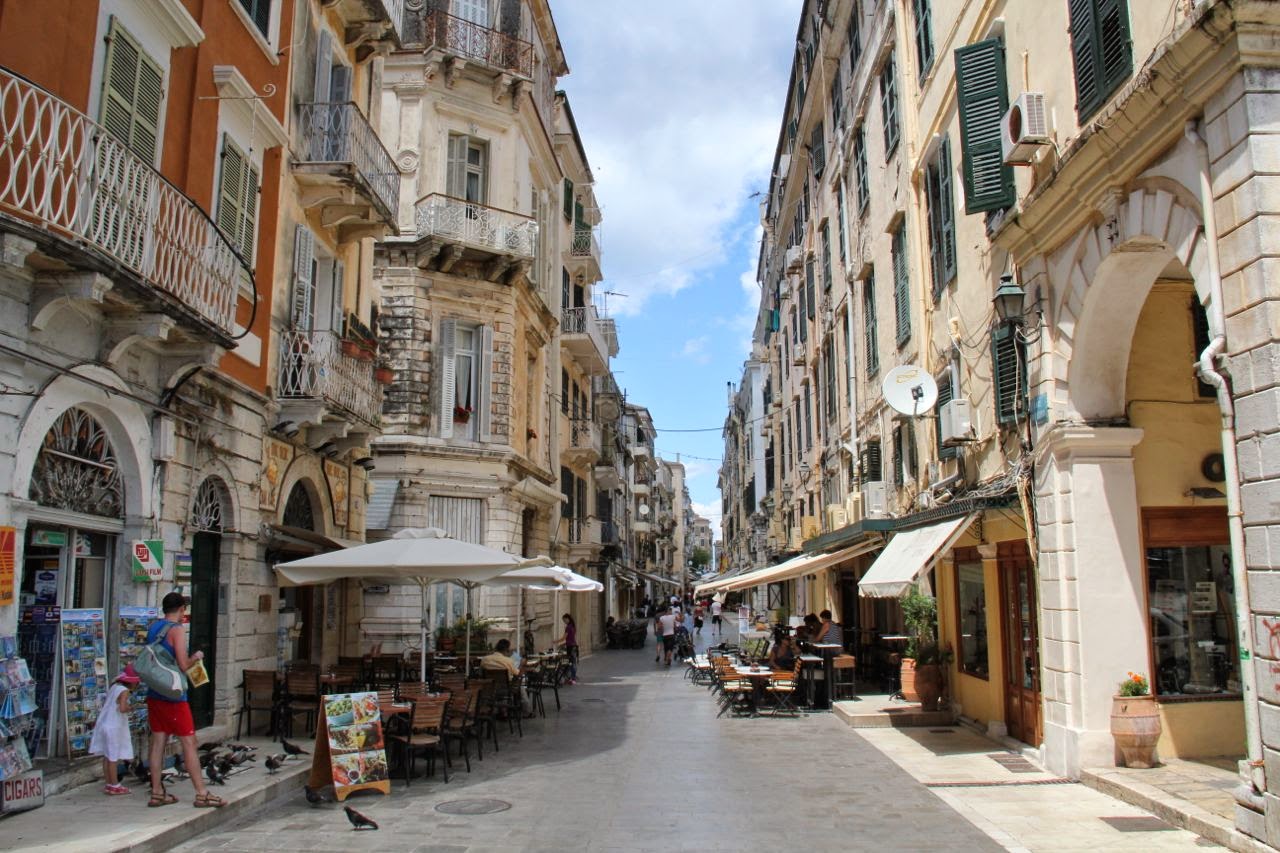 We rented a car for a day and drove around much of the northern part of the island. The island itself is mountainous with a rugged and much indented coastline that is very beautiful. Unfortunately almost that entire coast is covered with beach resorts, most of the rather tick tacky variety. If you drive the coastal road you will never be out of a rather continuous crowded strip mall like arrangement of small resorts and tourist conveniences of some sort. However, turn inland onto a secondary road and make one more turn onto any country lane and you very quickly enter an entirely different world.

The villages become Greek mountain villages with only a very occasional villa for the more adventurous soul. The views out over the island and the sea are spectacular. The 'roads' are narrow, very steep to and not for the entirely faint hearted. Its a part of the island probably much less than one percent of the "all inclusive"  fly in, fly out tourist ever sees.

So what  is Corfu? Its certainly one of the most traveled places in Greece. Its physically very beautiful but much of that beauty is spoiled by less than beautiful development. Its a place where, if you're stuck in Manchester or Frankfort and want to get the hell out to somewhere, you can get a cheap charter flight and a package deal for a few days on a beach. For a yachtie the few out anchorages are very crowded and the one big marina, Gouvia, is not convenient to anything interesting. However, Mandraki Harbor is a very excellent spot to be and the Old Town of Corfu is not to be missed.
Would I visit Corfu as tourist? Yes, but I'd get a good pension in old town and rent a car to see the island. For a yachtie its definitely worth the trip and we highly recommend Mandraki Harbor.

So for today we are relaxing in Platerias. Tomorrow we'll probably head back to Port Gaios on Paxos Island which was our anchorage previous to Corfu. Port Gaios is one of those spots we visited twenty five years ago on a bare boat charter.
Its still pretty but greatly changed and much more developed. Its now on the season circuit for day trippers from Corfu and every afternoon about six trip boats disgorge maybe a couple thousand trippers to wander the waterfront for about two hours and then be gone. We'll spend one more night there and then be gone ourselves.

So since the last blog update we have left Meganisi and gone north to Levkas through the Levkas canal. And I will add "without incident" because when we went  up the canal twenty-five years ago we ran aground twice! We spent a night at the marina in Levkas which was nice enough and the town of Levkas was actually very nice, busy and bustling, but for real and very sweet.
We made the thirty mile motor job up to Port Gaios in Paxos easily in flat calm conditions. And the twenty-five mile motor job to Mandraki Harbor in Corfu in equally glassy calm weather.


So we've almost entirely avoided the prevailing northerly winds in the Adriatic that, if they move into the Ionian, can make progress northwards a real pain. We're headed south now, which should be equally easy and within a few days we'll be in Preveza preparing to haul out the boat and go home.

Posted by Bill and Janet Wickman at 3:10 AM