The boat is done. Ok, Ok, anyone who knows boats knows that's not an accurate statement. A boat is never 'done'. However, the major jobs I had planned when this process began, plus a few more, have been completed. Everything looks great. 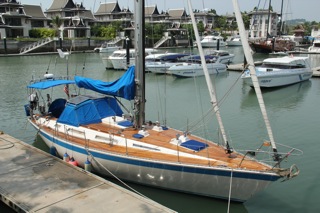 Although I spent a lot more than I had planned, we did a lot more and when I think of the cost I immediately think of the costs if I had done this work in the western world. That feels much better!  My rough estimate is that the costs here were about twenty per cent of what I would have paid at, for instance, KKMI. And although KKMI is my standard for a good yard I have my doubts the deck work could have been done as well there. And the deck work costs were probably about ten percent of what it might have cost in the USA. The only problem was with the first installation of the galley counter tops. That work was redone without argument and the finished product is very nice.
So we're about ready to go cruising around the Phang gra gulf. We'd be gone already but  we have this nice air conditioned room rented until the eighth. We decided to hang around until then. We've rented a car, Janet was tired of the daily dance with death on the motorcycle, and have actually done some sight seeing. Air conditioned comfort again! We've found a couple restaurants that  break up the boat yard 'eat street'  monotony.
We've started to provision the boat. We may have friends coming down from Bangkok for a couple days. If so we'll take them out on a little over night shake down voyage. If not, we'll shake it down ourselves on the way out.
So our experience with yard work here has been very good. There have been frustrations of course and communications is the biggest problem. Nothing is quite so foolish as to assume the Thai you're dealing with understands exactly what you mean in English. If there's any question it better be translated by someone you know understands what is desired. Most people here talk about having a good experience but it's certainly not universal. There is at least one ongoing horror story.
We've been very lucky in our choice of Phon Carpentering for the deck work and incidental varnishing and carpentry we've had done. I've said plenty about Phon and his crew and we've become kind of close, a little like family, over the past few months. Phon took everybody out to dinner last night, including us about twenty people, and we had a very good time at a Thai barbeque place. An evening like that will not be forgotten.
For any yachties coming this way I recommend Phon Carpentering without reservation for  wood work, varnishing or any non-steel fabrication. Don't hesitate to ask us for contact information if you're interested.
With a little thought we'll be able  to remember how to sail the boat. We had the dinghy out today motoring around the estuary. It started right up and ran very well. Boat systems seem to be working. Wish us luck!

WOOHOO! The boat looks wonderful and Misha seconded the motion, he found the craftsmanship amazing. Have a great sail and thank you for the pictures and updates.

Hello from Japan!
Bill and Janet, You are in Thailand!!!

We are doing good in Japan.
Thank you for your prayer for Japan.

We miss you so much!
Love Yukiko